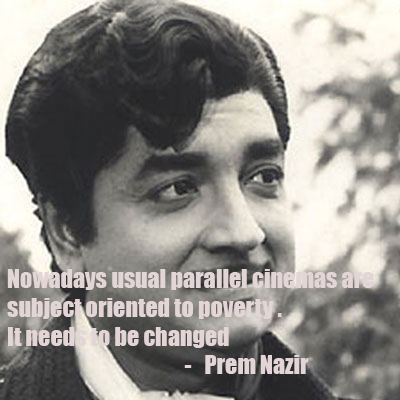 Parallel cinema has always been closer to human realities when compared to mainstream commercial movies. They have always tried to flash light on the unexplored raw aspects in a different perspective that have never been explored by other means of media or arts. This eventually led to the rise of the Parallel Cinema movement that inspired a revolution in Indian film industry.

However, there has been a series of off-stream cinemas that delve into the obscure and disturbing aspects of poverty, which endures anyone to understand the unusual relation between the media and this particular theme. Noteworthy productions in this list are including Mother India by Faqru, Awara by raj Kapoor, Salaam Bombay by Mira Nair, Dhobi Ghat by Kiran Rao, etc. One major social evil in India, that is seen and felt commonly is poverty and hence it cannot be neglected. Many people find themselves unable to turn a deaf ear against the plight of the fellow people around them and hence make use of this medium to voice out their pain and grief.

An important factor can be considered as the background from which the producers of such movies come from. Most of them have been in situations annoyed by poverty and other problems. Growing up, they found the media an opportunity to showcase what they have gone through and their feelings. Also, these movies are related to and depict major events that actually happened in the Indian political, economic and social scenarios.

Such movies are shot mostly in areas that have served as the generators of themes, perhaps maybe the place where the maker has born or has spent a considerable period of his or her life. This allows the maker to add more real elements in the movie that have been observed and analysed by him over time. It is also noted that such alternative movies require very low budget, compared to mainstream films which spend cores on the technology and production.

People also find it easier to relate to such films as they are raw as our flesh and blood and are real. The audience find themselves in the characters portrayed, who go through the very same situations they have gone through.

However, it is a sad fact that most people do not prefer to watch the same pathetic situations as their lives on the screen. They rather look for entertainment that would lift their moods and hence such realistic parallel films are less welcomed by Indian audience. Hence such productions, where Indian or foreign find it difficult to get distributors and often suffer financial setbacks as those movies portray poverty which the audience is reluctant to watch. An example for such an extraordinary, but ill-fated movie that has not been yet released in India is Libaas (1998), starring Nassarudhin Shan and Shabana Azmi.

Behind the scenes: The critical condition of film criticism in India..
NOSTALGIA vs. DEMOCRACY: The tale of two tools.