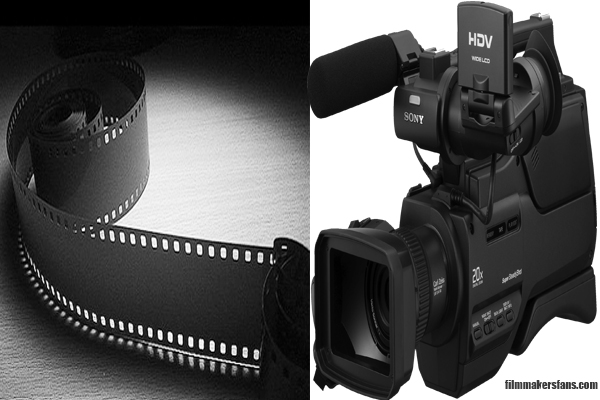 The history of cinema is also a history of technological innovations and advancements. Cinema was formed with this constant dichotomy of changes, from silent to sound; black and white to colour; from analogue to digital.

When for some, film making is impaled with the replacement of films or celluloids with the digital medium, for some it’s just the democratization of the medium and for others it’s just two separate tools for expressing the content and not about the grains or pixels.

In 1980’s when Sony introduced the idea of electronic cinematography utilizing its analog Sony HDVS professional video camera, it was never thought that this idea of digitization can create so much hype in within a span of 20 years from then

Digital Cinema Revolution is started when George Lucas in 1999 included footage shot on HD digital camera in ‘Star Wars Episode 1: The Phantom Menace’ and was played in a digital projector, the same film ‘Star Wars: Episode VII’ set to release in 2015 December was shot on film by J.J Abrams which is striking and rare in the present scenario of entirely digitalized Hollywood. Thus in the age of bits and bytes few of the ‘film’-makers and cinematographers still relies on the traditional analogue cameras which they think is the only option closest to the human eye-the best camera ever .

Besides the nostalgia of emulsions, grains and luster of the films, the characteristics that put analogue ahead of digital media are it’s-(1).Depth of field (2) Broad exposure latitude.

A 35-mm film produces shallower depth of field, that is the distance between the nearest and the farthest object in a shot is less making part of the frame blurred or under soft focus emphasizing the subject while de-emphasizing the background and the foreground.

Films have better exposure latitude that is the underexposed or overexposed areas are rendered better in the film than digital medium and it thus shows better details in a frame.

Though the gap is decreasing fast enough by the advancement of technology yet some believe that the rich range of colours and the tones yet remains unmatched by the digital.

As far as archiving is concerned, experts believe that film is the best way as tests proved that polyester and chemical films can last a minimum of 400-500 years if stored at proper temperature and humidity, though storage cost is far less but hard drives do not last long. Besides repeated advent of new file formats in the market impart serious problem for the archivists.

But most of the big studios are now making ‘films’ digitally. More than 85% of bollywood movies are being shot on digital cameras like Red Epic cameras or ARRI Alexas, to avoid the cumbersome process of developing, processing and digitizing a film with the help of digital encoder as nowadays most of the editing process are done in computer softwares. In digital, this processing can be avoided, it’s directly shot in a SD card and stored in hard discs, digitally distributed and projected.

Besides, shooting in a film camera is extremely expensive, apart from the charge of the camera itself, a 400 ft of 16mm film which lasts only for 11 minute costs about $100 while in SD card one can shoot over and over again. So, it has been a great privilege for the young independent film makers with shoestring budgets to achieve good quality in low cost by this digital revolution. Estimation shows, it has cut down a minimum of one tenth of the the production cost.

In addition light weight digital cameras are convenient for shooting outdoor shots in the available natural light too.

Texture difference of films and digital makes it difficult to integrate the special effects but CG works can be easily integrated in the digital medium.

The medium is also reproducible, videos can be copied over and over again without any loss in the quality which is rare and expensive in case of celluloid.

From the first screening to the last the quality of the digital  always remains  the same, while in case of 35mm often dark spots appear  on the screen due to dusts after one or two screenings in the theatre.

All these conveniences have made digital well acceptable among most of the directors of Hollywood as well as Bollywood. Recent Indian movies like Chittagong, Ankhon Dekhi, Cosmic Sex, Badlapur, or much awaited Bombay Velvet  all are shot digitally. For most  new age Bollywood  directors like Anurag Kashyap, Onir, Bedabrata Pain digital cameras make film making easier and economical cutting down costs of bulky cameras and elaborate lighting processes.

“The lower the cost of the film, the more you can experiment.Then it becomes like actual art.”

In India cameras like 7D opened up a whole new world for independent film makers like Q, changing the trend of film making. For documentary makers like Nishtha Jain “it allows new voices, voices from small towns to speak out”. Without digital medium Alexander Sukurov’s masterpiece single 90-min steadicam shot ‘Russian Ark’ would have not been possible. Slumdog millionaire was the first digital motion picture to receive academy award for best cinematography, where the light weight digital camera was the matter of choice to shoot in the slums of Mumbai for the cinematographer Anthony Dod Mantle.  Directors like Peter Jackson or Steven Soderbergh all are big proponents of digital cameras.

While some of the big names like Tarantino thinks it as the death of cinema.

Fujifilm and Technicolor no longer produce films for motion pictures, Kodak being the last remaining film producer, directors like Christopher Nolan, Judd Apatow, Quentin Tarantino and J.J. Abrams assembled to convince the big studios to buy a set number of films from Kodak to keep the celluloid medium alive.

Though the average movie goers are not aware of whether a movie is shot on a film or digital camera for the people behind the camera it’s the matter of freedom of choice between two tools to express the feel of the script. So, although some strongly believe the shift to digital from analogue is a natural evolution of film, for some like Steven Spielberg, “the favourite and preferred step between imagination and image is a strip of photochemistry that can be held, twisted, folded, looked at with the naked eye, or projected on to a surface for others to see.”