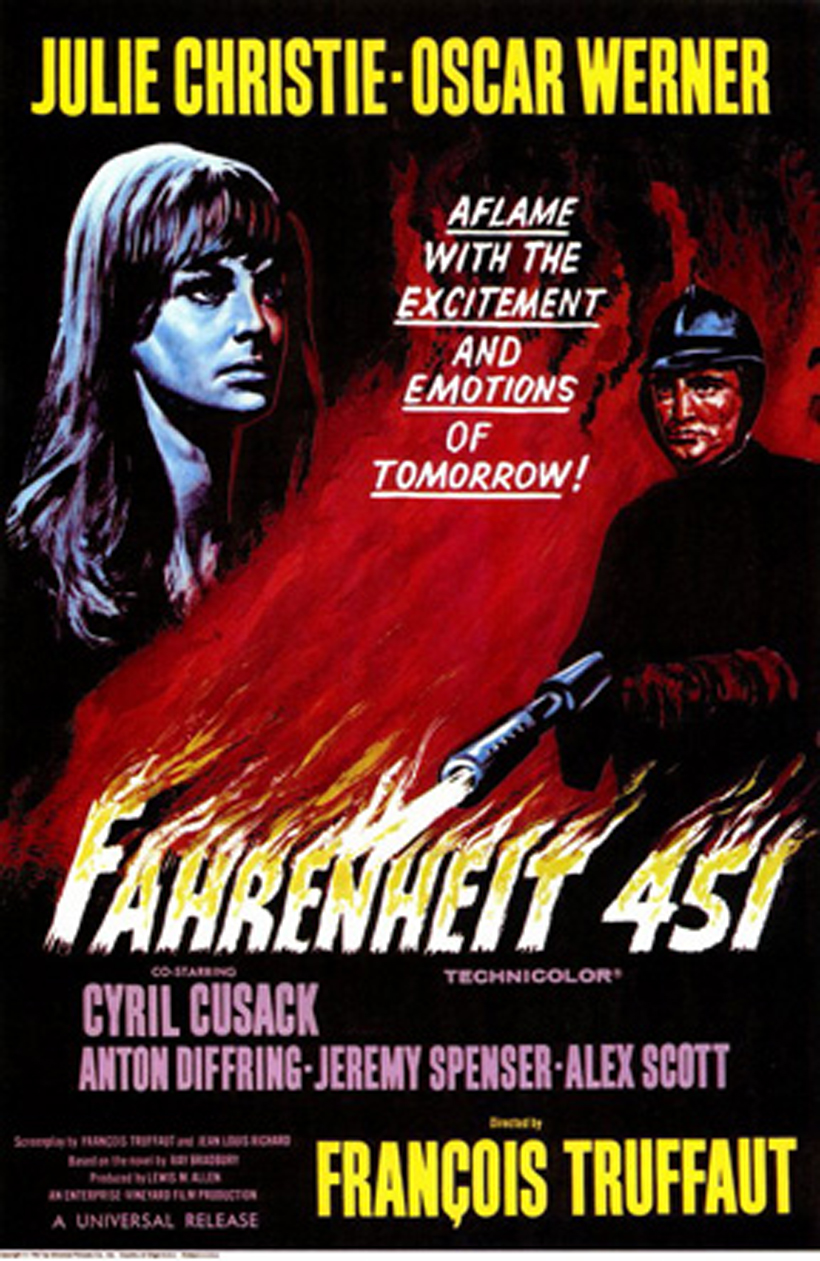 Why do we feel the urge to read books? Is it only To know someone else’s experiences and feelings? Is it only for the sole purpose of entertainment? Or is it because books and other art connect us with each other?

Based on Ray Bradbury’s novel, this is the first and the only English Film by Truffaut. It is interesting to know that Truffaut barely spoke English. Truffaut considered this, his most difficult film to make, partly because of his inefficiency in English and also because of his conflicts with Oscar Werner on whether or not Montag, should be portrayed as a hero. Truffaut refused to depict Montag as a typical movie hero.

Fahrenheit 451 is a film about a future dystopian society, where books & printed words are banned. Books are considered harmful to the human society as it makes a person superior than someone who hasn’t read it, which is considered “anti-social”. Each person in the society is expected to be equal. People watch interactive TV shows which are censored and tailored to cater mindless entertainment to its viewers.

Firemen are appointed to find & destroy all the books. They can search any house or person anytime they want. Montag (Oskar Werner) is one of the firemen, who was very fond & proud of what he was doing until he met Clarisse (Julie Christie) who inspires him to read a book which he burns.

The film (or the book) is a somewhat Anti-Communist Anti-Fascist statement. It goes on to show how equality between humans can’t be achieved by restricting them. It can be achieved only by liberating them. The last sequence, where the book people live in harmony, illustrates this statement. It’s a satire on the society which refuses to accept their inner feelings, by not knowing about them.

Casting Julie Christie as both Linda & Clarisse was a masterstroke as it goes on to portray the two sides of the same coin. Two women in Montag’s life, yet they are so different on the mental level. Linda is a conventional housewife

who is scared of books and whose mind is controlled by TV shows. Clarisse is a woman who reads books and has a fresh outlook towards life. Julie Christie’s acting skills are nowhere near perfection though. It feels robotic and not effortless.

Truffaut didn’t put “Love” between the characters. There was only one scene of Montag and Linda getting physical because of the treatment she received the previous night and was feeling “hungry”. Also, when Montag asks Linda whether she remember the first time met, she said no. This subtly indicates that in a Society, where people ignore their feelings, love in its emotional form cannot exist. Love, in such society will just be for the purpose of reproduction.

Another detail, which grabs our attention from the beginning of the film, is the reading out of the titles. It just gives us the sense of the society where printed words are barred.

Despite being a science fiction film, Fahrenheit 451 show only a few futuristic inventions. The monorail being one of them. This was done deliberately to keep the focus on the dystopic society which is timeless.

The narrative structure of the film is fairly simple and follows mainly a linear structure. There are a few jump cuts used, a trademark of European cinema at that time. Long shots like the scene where Montag and Clarisse walks from the monorail station, was remarkable, but performance of Julie Christie kills the scene to a certain extent. It just doesn’t feel normal. It appears to be too theatrical , like acting in Hollywood commercials was.

This was Truffaut’s first color film. Cinematography by Nicholas Roeg was good but not stunning. Nearly every scene of the film has shades of Red present in it. Firemen vehicle, office, Montag’s night-dress, Clarisse’s Jacket, Train compartment, etc, all Red. It gives a certain tone to the film, but sometimes it just feels overdone.

The Sound Design of the film was also nothing remarkable. It had great potential, as with any science fiction, for creative Sound Effects Design. But, it was not used exhaustively. The sound of monorail just sounded like aero planes. There was no remarkable sound of the firemen vehicle, the firemen alarm sounded just as the usual ones.  The sound doesn’t represent the timeframe of the film. More creative use of ambient sound could have been done than just chirping birds.

The score of the film was done by Bernard Hermann which was the best it can get. From the selection of instruments to placement of the music in the film, all were perfect. The theme that plays everytime the firemen goes on a mission was chaotic, capturing sonically the maniac minds of these law enforcers.

NOSTALGIA vs. DEMOCRACY: The tale of two tools.
Box Office Reality: Changing trends of the commercial Hindi Films in India