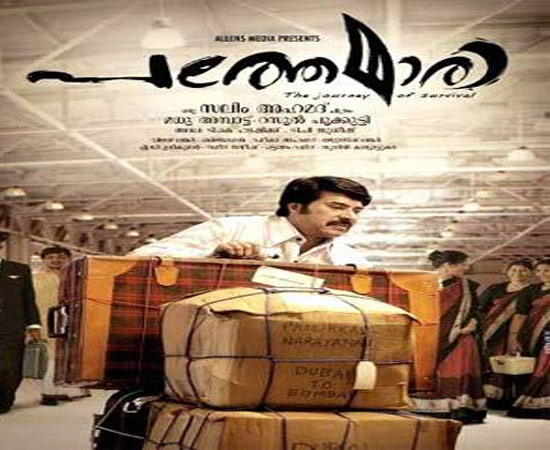 Salim Ahamed’s classical Malayalam Film ‘Pathemari’ (English-Dhow) will be screened at the ‘Competition section’ of 9th Muscat international Film Festival (MIFF). This information was first released by Mr. Salim itself through his official Facebook page.

In a statement to a Media, Mr. Salim Said  ’With Pathemari’ getting selected in MIFF, I hope the subject of the film will reach to more people. Responses from those who could connect with the story has been pouring ever since the film released, as it reminded many of the Gulf Stories in their own families.’

The story features the life Pallikkal Narayanan (Mammootty) who migrated to the gulf in the early 1980s for hunting a job and thereby securing his family. Alongside Mammootty, the cast includes Salim Kumar, Shaheen Siddique, Joy Mathew, Jewel Mary and Siddique. The stunning cinematography was done by Madhu Ambat and the sound designing was handled by academy award winner Resul Pookutty.

The 19th edition of Muscat International Film Festival (MIFF) will be held from March 21 to 28. Indian Actor Irrfan Khan was invited to appear onboard as a chief guest of the event.- The Media report from Muscat says.