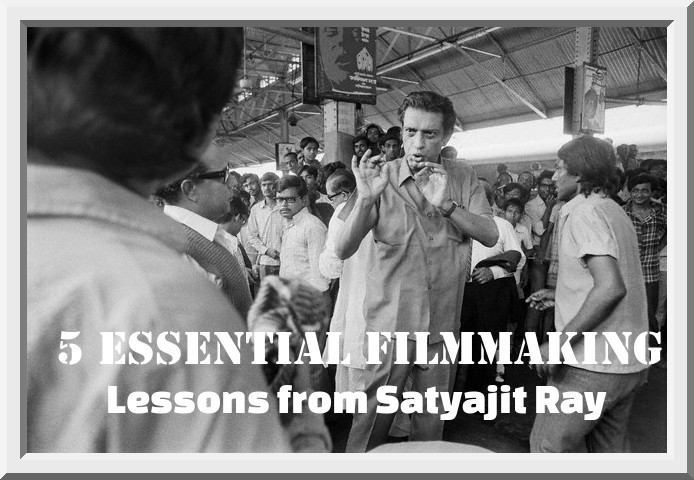 Five essential Filmmaking tips from the Master Director Satyajit Ray. Satyajit Ray’s Pather Panchali (1955) is a landmark in the map of World Cinema. It was a phenomenon in India when it came out and later it became the most well known Indian film internationally. But, the making of the film is full of challenges. Satyajit Ray’s book “My Years With Apu” accounts all those challenges and interesting incidents during the shoot of Pather Panchali.

Satyajit Ray, his cinematographer Subrata Mitra and many others in the crew were working for the first time in a film. But, the film looks flawless and not amateurish. This is a very important quality that a filmmaker, the captain of the ship, should have. He should guide the entire crew with his clear vision and confidence.

2. Facing the Challenges of Low-Budget Filmmaking–

Pather Panchali had no stars, no romance, no songs or dances, not even a story or drama in the conventional sense. Naturally, producers turned down the film because it was not viable commercially. Satyajit Ray started the shooting with only Rs. 8000. At that time it was not easy to make a low budget film.  The camera and film stock were highly expensive. The shooting took over 2 years to complete due to lack of proper funding. Satyajit even had to pawn his wife’s jewelries to get funds to shoot. It was only the perseverance, patience and dedication of the filmmaker that made it possible.

Almost all the main characters except Harihar were played by amateur actors with little or no prior acting experience. It is always hard to extract the best in them especially when they are children. And, here also only the filmmaker has the ability to do that. Ray, well known for his use of non-professional actors, was highly skilled in this. He can make the actor follow his instructions thoroughly. This is an essential quality of a filmmaker.

Anyone who has watched Pather Panchali will always remember the scene where Apu & Durga runs through the Kaash fields to get their first-ever glimpse of a train. Satyajit believed Real Location always have its own charm. Pather Panchali was a manifestation of that thought. But, shooting outdoor and in real location was very challenging at that time when the cameras and the other equipments were heavy and it was cumbersome to transport these to the location. The whole film, except some night scenes, was shot in the village of Boral. Satyajit acknowledged that without the cooperation of the villagers, it would have not been possible.

Satyajit is one of the most popular writers in Bengali. His lucid language and unique stories are still revered by many. Yet, when he chose to make his first film it was based on other’s work. Satyajit logic was that Bibhutibhushan Bandopadhyay’s novel was very visual and he could give his cinematic expression to it and not worry about the storyline since the ideas are universal and anyone can relate to it on a personal level. Many independent filmmakers now lean towards original stories, even if they are very mediocre. We already have a rich literary heritage which is waiting to be translated to language of Cinema.  It is very important that we explore those.

Pather Panchali has made immense contribution to Indian Cinema and there is a lot more to learn from it. Any film buff should study it in detail to get a better understanding of Cinema.

Continue Reading
You may also like...
Related Topics:Filmmaking Tips

All you need to know about Film Lighting: Part 3
5 Techniques That’ll Help You Shape Light Like a Pro