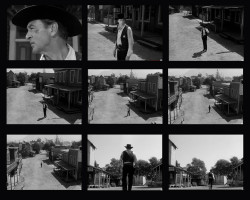 Visual impacts are the main attraction of movies; better visuals are form from group work and innovative thinking. Now, what are the basics of Movie visualization? And how it became practically possible?

In Filmmaking, the director is the one person who can effectively led the entire crew. without the effective and timely involvement of a director; the movie wouldn’t be successful at all. On the basis of script, the director plot and imagine the shots and deliver the idea to the other crew members like assistant directors, art directors, visual effect supervisors, artist and cinematographers. Usually the final ideas  are generated from these discussions.

In General a scripted- video is made up through these four processes.

1). what does the term “Frame” meant in movie making?

2) What does the term “scene” meant in movie making?

In This Image, Red Highlighted is Location, where the story Is Happens

3) What does the term “shot” meant in movie making?

Shots are the indispensable part of a movie; good movies are born through better and planned shots. It scribed according to each scene like what type of shot needed for that particular scene, the camera angle, the camera lens, character location and other co-artists presence etc. Usually these shot divisions are formatted as drawing which usually done by portraying artists with the instruction of director, sometimes the director itself do this task.The shot division process is usually starts after the acceptance of the script.

4. What does the term “Sequence” meant in movie making?

Series of scenes united to form sequence, which are usually linked with connected or hooked one by one. Sequence determines the entire structure of a movie; or it is the way that a movie is happens.