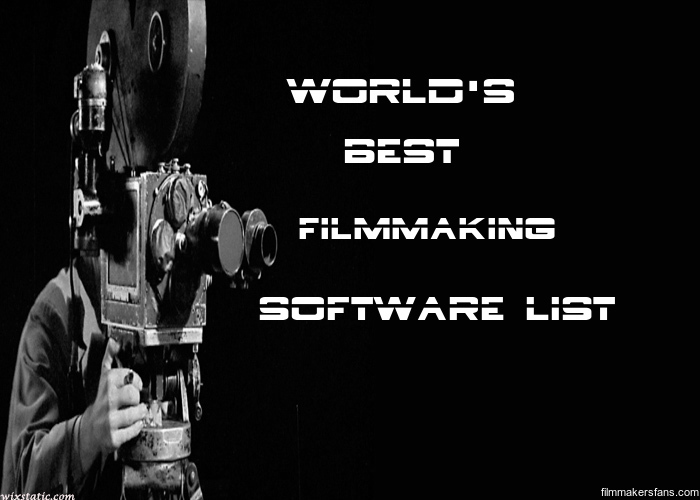 Here we are Introducing you some of the best Filmmaking Software that available for Premium and free downloads. We hope we put our best effort to write about this list of movie making software. Your questions, opinions and doubts can find a space at the comment section shown in the end of this post.

The final draft is an award winning script writing software developed by Final Draft Inc, headquartered in Calabasas, California. On every year, lots of updates are scheduled in this application that integrated with many potential modifications. The latest version is Final Draft 8.0, which is compactable with both the Windows and Mac operating system.

The Celtx is best known as the free script writing software that developed the Greyfirst Corporation. Without any registration, the application can be easily downloaded directly downloaded from its website or from the software selling third party web pages. The Celtics have its own customized templates for writing the screenplays, stage plays, documentaries, comics and tele-series videos. Apart the free version, the Celtx also introduced one premium version, namely ‘Celtx Plus.’

The movie magic screenwriter is one of the oldest filmmaking software that purposed for writing the Movie scripts. The application was developed by Write Brothers, Inc in 1982. Its features and gadgets compatibility are tested and approved by the leading associations like the writers Guild of America, the UCLA Online Screenwriting Program, Project Greenlight and Austin Film Festival.

The movie magic scheduling is a leading script break down software owned by the writers store Inc. The application helps to make a break down (split) your whole script easily. Some highlighted features of the movie magic scheduling are breakdown sheets, Elements quick entry, Element linking, attaching image options, and many more. The application available for both the Mac and windows versions and also the developer offers 30 days money returns from the unsatisfied Buyers.

The Movie Magic 7 is a ‘writer store Inc’ product made for estimating and managing the cost of a project.  The application has already included with wide ranges of budget planning templates, so that you don’t need to study more about the things to include in the budget planning. The application is available for both the windows and Mac versions, 1024×768 is the minimum system display resolution needed to use the application.

The Avid DS (Digital Studio) is video editing software made only for the windows platform.  Initially on the beta stage, it was run on the SGI platform, later due to the compatibility and the system errors, the software ported to the windows platform. High speedy operation is the highlighted features of Avid DS.

Audacity is a sound editing and video editing software Compactable in MAC, PC and Linux Operating systems. The application, developed by a group of tech savvys and it issued to public Under General Public License (GPL).

This is how a good filmmaker makes budget planning for his film
Here is it: World’s Best Ten Free Film Editing Software download Links