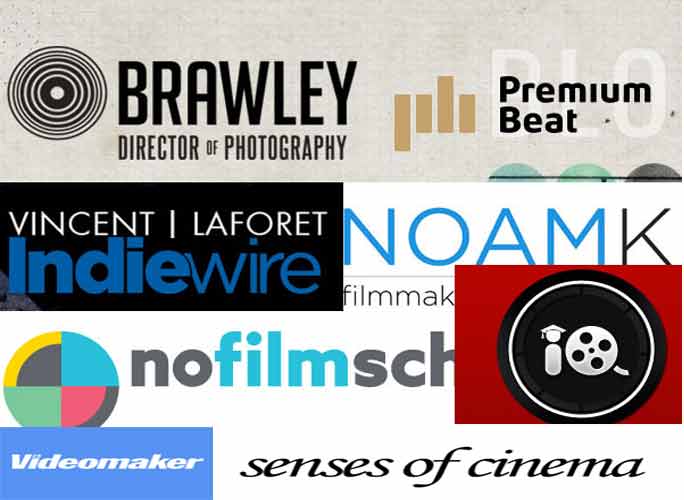 Filmmakersfans.com listing the top best websites in the world that useful for filmmakers, cinematographers, sound designers, video editors and screenplay writers for learning.In the digital age, information is accessible to everyone through internet on every aspect of film and filmmaking. But, finding relevant and genuine information might be hard to find in this ocean of knowledge.

The indieWIRE was launched as a newsletter in 1996, providing news service for independent film. It was launched by filmmakers and writers Eugene Hernandez, Mark Rabinowitz, Cheri Barner, Roberto A. Quezada and Mark L. Feinsod.

IndieWire has since grown into a reliable source for film and television news, reviews, interviews, global festival coverage, etc. It is a must visit website for every independent filmmaker.

In the website, you can find latest news and unbiased reviews, tips and techniques video, learn about various products and technologies.

FilmmakerIQ was launched in 2008 by a group of filmmakers and enthusiasts to celebrate the digital revolution in filmmaking.

They provide how-to articles, tips, videos, videos about filmmaking, film theory and film history. The quality of their videos and articles has made them the most popular filmmaking website. Any film enthusiast will find something here.

Senses of Cinema was founded by filmmaker Bill Mousoulis in 1999 as an online film magazine. It contains article from renowned film critics including critical essays, career overviews of the works of great directors, and coverage of many international festivals. It also publishes interviews of film personalities.

Senses of Cinema maintain a database of career overview essays on “great directors.” giving a critical perspective on their works.

Film Comment was founded by Joseph Blanco in 1962 as a print magazine in New York during the boom years of the New American Cinema.

This a great resource for everything related to Cinema. From screenplays, interviews, videos grouped around themes, films or directors, behind the scenes and rare photos, you can find everything here.

In Cinema5D you will find latest information about the latest advancements in camera and filmmaking technology as well as industry news, reviews and analysis of cinema cameras and video DSLR’s. It is a great resource for filmmakers.

This blog is an extension to a great book on Film, “Film Art by David Bordwell and Christin Thompson”. Both of them are celebrated film scholars and has an encyclopedic knowledge on films. This website contains their analysis on various aspects of film and filmmaking. This is a must visit website for every serious film student.

Everyone affected with serious Cinephilia will always need someone to suggest them more and more films to watch. Taste of Cinema is that friend. They regularly publish lists of films based on theme, genre, filmmaker, country, technique and various other categories. Their focus on world cinema and their variety of categories make them the mecca for cinephiliacs.

Of course, the  website run by us Filmmakersfans.com  has included as many tutorials and articles on Filmmaking, Sound Designing, Cinematography, Film editing, etc. Also, we are Including frequently about the latest updates of Film submission alerts to various film festivals across the globe.

Random Lists of other 26 Best Websites For Filmmakers

Continue Reading
You may also like...
Related Topics:Best websites for Filmmakers