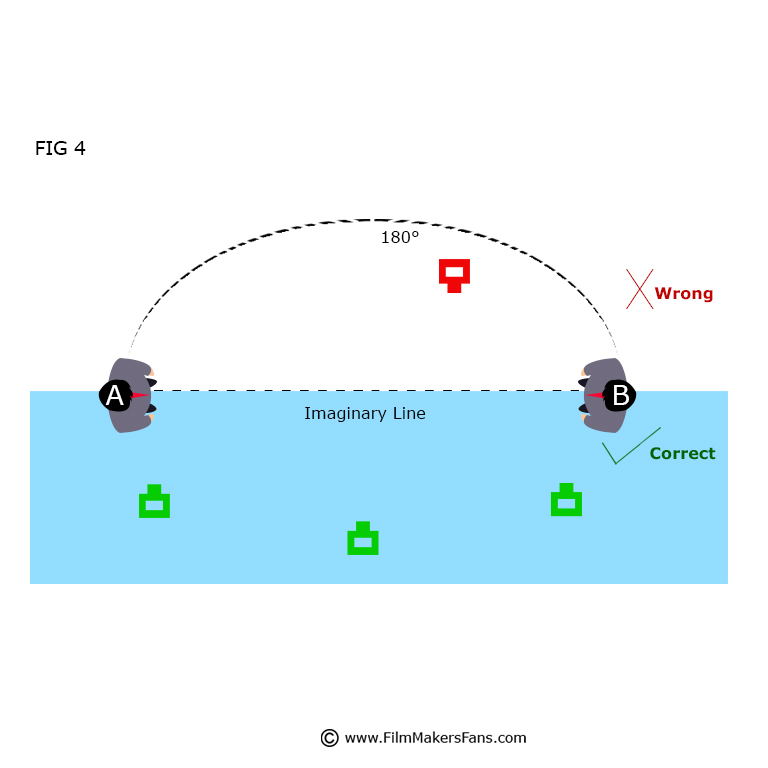 180 degree Rule is a framing rule which is used in Filmmaking in order to maintain the scene Continuity.

Let’s Move Deeper To this subject

Point Of View: Suppose in a scene there are two Characters A and B, where A looks To B is called the Point of View OF A (Pov. A) and B looks To A is called (Pov.B)

Shots:  It is used in films for the purpose of video Composition on the basis of Shooting script.

We’ve placed two characters A and B on the two portions of a semi Circle, (Fig 1) where A look To B and B looks to A. We placed a camera In Between these two subjects. There is nothing wrong in this scene Composition. Right? Yes

Now let’s place the camera closer to A. As you can see in the image (Fig 2), we place the camera below the imaginary line and the character A is looking to the right side of the camera. This set up is called Pov.B (We Hope you already learned about the term Point Of View Shot from glossary Explanation)

Now we placed the camera Near To B, Where B is looking to the left side Of camera. This Set Up is called Pov.A. (Fig 3)

Now we are aligning these three shots; what you are going to see is: – An establishing scene of two characters (1st Shot) and in following scenes character A and B are talking each other in an imaginary line. So the viewers would understand the spatial relation between the characters. So if we break the Rule, then this sequence didn’t seem as effective.

Things You Must Remember before Filming through 180 degree Rule

Where can we apply 180 degree Rule?

Guerrilla Filmmaking : Things You Must Know Before Starts Shooting
Exactly, How Many Cameras really need to make a Movie?