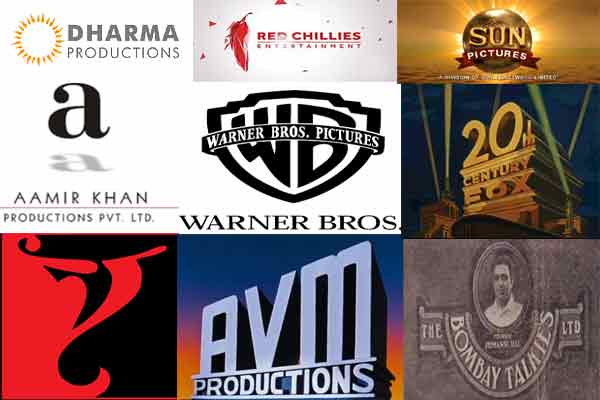 AGS Entertainment was started by three brothers Kalpathi S. Aghoram, Kalpathi S.Ganesh and Kalpathi S. Suresh in 2006, which is now acclaimed as one of the best film production companies in Tamil Film industry. They are producing an average of 2 films in a year.

Cloud Nine Movies is a Film Production Company Jointly started by Dayanidhi Azhagiri and Vivek Rathinavel, who were previously known as the founders of Kalaignar TV. Gautham Menon’s critically acclaimed super Hit Film Vaaranam Aayiram (2008) was the first came out through Cloud Nine Movies banner. Thereafter, the company subsequently received many Box-Office hits, which helps the firm to get listed it among the top Film Production companies in India.

Madras Talkies is a Tamil Film Production company started by Filmmaker Mani Ratnam and his wife, actress Suhasini Maniratnam in 1995. The Company itself producing and distributing non-commercial content valued films to all over the world. Iruvar (1997), directed by Maniratnam was the first film released through the Madras Talkies.

As like YRF Productions, AVM Film Productions Chennai is one of the oldest Film Production Companies in India; Started in 1945, the company has produced 170+ Films in Tamil, Telugu, Malayalam and Bollywood. A big credit of AVM Productions is, it has given career-break to numerous actors to the Indian Film Industry such as Vyjayanthimala, Sivaji Ganesan, S. S. Rajendran and Kamal Haasan.

Studio Green is an Indian Film Production and Distribution company started by K.E. Gnanavel Raja, in 2006. Mr. Raja was a closest relative of late veteran actor Sivakumar and that might be the one reason why most of their films feature his sons Suriya and Karthi.  The company produced numerous Tamil Films and distributed films across south India.

Gemini Studios Chennai is one of the oldest film production companies in South India. Those who are passionate in the Film field in South India should have certainly dreamed at a time ever in their life about getting a  job in Gemini studios .  They produced numerous films in the 4 states of southern India. An underlined fact about Gemini Studios is ‘All their Films are blockbusters in Box Office.’

Sun Pictures Chennai is Film distribution, Production and VFX Company based out in Chennai, India. The company was started by Business veteran Kalanidhi Maran. In the beginning stages, they distributed low-budget Tamil language films and later a year, they entered into the production of films including big budget range.

Geetha Arts Hyderabad is one of the best known Film Production Companies since 1972. The company was started by Allu Aravind in 1972 and now his acquaintances, as well as the prominent industry professionals-Allu Arjun, Allu Bobby and Allu Sirish joined as the partner of the firm.

Started in 1974 by C. Ashwini Dutt, Vyjayanthi Movies is known as one of the profitable film production houses in India. The company not only acclaimed in Telugu Film Industry, but also it has created many successful films in Hindi Film industry includes Company and Calcutta Mail.

Aashirvad Cinemas is a film production company based in Kerala founded by Antony  Perumbavoor in Kochi in 2000. The banner usually found in ‘Mohanlal’ starring films.

Friday Film Production house is a Kerala based film production company started by actor Vijay Babu and Sandra Thomas. The company emphasizes to produce more realistic films and that is the reason why it has bagged state-national level awards on many times.

Top 24 Film Production Companies in India: A Guide for the Jobseekers in the Film Industry
Complete list of Top 15 Film Schools in India | Part 1