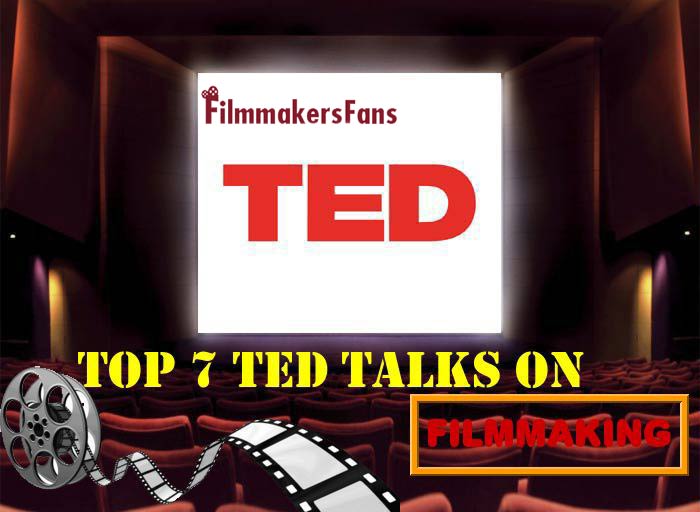 Here are the Top 7 TED talks on Filmmaking. TED stands for Technology, Entertainment and Design. It is set of conferences held globally where eminent personalities speak about their expertise in their respective fields. Though TED initially held talks only on Technology & Design, later it started holding talks on culture and art including Films. All these talks are shared on their website (www.ted.com) and their Youtube channel.

And, even later they expanded their horizon by sharing TEDx talks. TEDx, are independent talks held by third party organizers by obtaining the official license from TED. This enabled them to hold talks in many countries and having a big diverse amount of subjects in their collection.

Here, we selected 7 TED Talks on Filmmaking, which are the finest-

James Cameron is the Academy Award winning film Director who has directed some of the most critically acclaimed and commercially successful films of all time like Titanic, Terminator, Avatar, etc. Two of his films, Titanic & Avatar are highest grossing films of all time. He is well known for his science fiction films and his use of VFX. In this TED talk, he talks about how curiosity and imagination can lead a man to creativity. The talk inspires you to do things that you have never done before. He talks how his experiences in life made him what he is as a filmmaker.

James Cameron at TED Talks, Sharing his Experience on Filmmaking

J.J. Abrams is a writer and film director of the award-winning TV Series & Films like Lost, Star Trek, Felicity, etc. His latest film Star Wars: The Force Awakens (2015) is the third highest grossing films of all time. In this TED talk, he talks about his quest for unseen mystery.

3. “The clues to a great story” by Andrew Stanton

Andrew Stanton is an Animation Film Director at Pixar Animation studios. His films are highly popular and have won multiple awards. He won the Oscars for Finding Nemo and WALL-E. In this TED talk, he talks about how to tell a great story.

4. “The Beautiful Lies of Sound Design” by Tasos Fratzolas

Tasos Fratzolas is an Audio Engineer and is the founder of Soundsnap.com, which is most popular sound effects library worldwide. In this TEDx talk, he shows us how Sound Design shapes our experience of watching a film.

Related Read: Are you Interested in Film Lighting? Then, You must read this Film Lighting Tips and Techniques

5. “We are the stories we tell ourselves” by Shekhar Kapur

Shekhar Kapur is an Indian Film Director who has directed some of the Landmark Films of India. He won the National Award for Bandit Queen. His film Mr. India is a cult hit. He has also worked in Hollywood Films. One of his most popular films worldwide is Elizabeth: The Golden Age. In this TED talk, he talks about how to break your inhibitions as a filmmaker and how to think simply out of the chaos.

6. “The art of creating awe” by Rob Legato

Rob Legato is an Academy Award-winning visual effects supervisor. He has worked on Films like Titanic, Hugo, Apollo 13, Star Trek, etc. In this TED talk, he talks about his way of enhancing the reality and the mundane things

7. “A cinematic journey through visual effects” by Don Levy

Don Levy is an Academy Award winning Visual Effects Artist. He has worked in Sony Pictures Imageworks for a long time. In this TED talk, he shows us the evolution of VFX throughout the History of Cinema.

All these Best TED talks on Films and Filmmaking can be accessed from this playlist:

Thanks & Keep visiting us!

What do you think about this Article? Did you watch  any other TED Talks on Filmmaking/ Cinematography than these 7 ? Please, Comment your answer below. We will add it here.