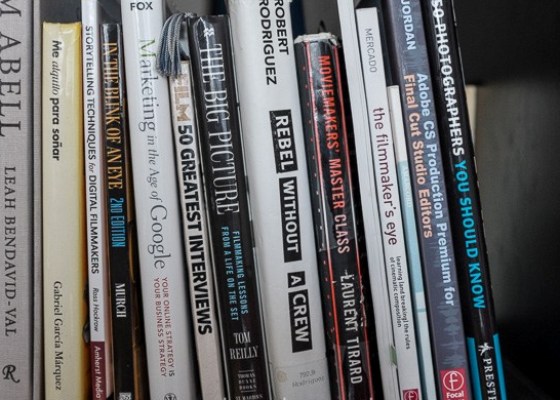 In this digital age, there are abundant resources for budding and aspiring filmmakers to provide an initial starting point for their careers. There are numerous applications on their phones to give them an overview of the actual hardware, there are uncountable video lessons, given by people from every nook and cranny of the world, convincing the newbies that they could help them to stardom. Despite this, the real knowledge still lies in the books forgotten, the books that compile an artist’s years of experience, carefully crafted, to teach the readers, not the way to complete a task, but also the different errors they might make. Below is a collection of such master pieces, waiting to educate the budding artists in you, be it a cameraman, a cinematographer, or an actor.

Coming straight out of the mind of the legendary director of 12 Angry Men, Serpico and Dog Day Afternoon, Sidney Lumet, Making Movies takes the readers through all the aspects that makes a director, a director. He mentions various instances, based on his personal account, from working with actors to overseeing the ins and outs of a film. He goes on to mention that the skillset, a director must possess should not be limited to a single part and be a diverse one.

2.Rebel without a crew :

How a 23-Year-Old Filmamaker with $7000 Became a Hollywood Player – With movies like Once upon a time in Mexico, and Sin City under his belt, director Robert Rodriguez has moved on to write this amazing book that explains his journey, as mentioned in the title. Concentrating on the time he made his first feature film, El Manachi, Rodriguez divulges, how he was able to make a movie on a shoestring budget, through a full shooting script that is included in the book for aspiring writers.

10 Must read books about Indian Cinema

Definitive Guide to Legal and Financial Secrets of getting your movie made. – Anyone looking to get into the profession of filmmaking, has to consider the financial and legal aspects of it, as it is of extreme importance in the business. For anyone looking to explore the nuts and bolts of financing and distribution of films, this is the best, no-nonsense book available on the market, breaking down the entertainment law to the atomic level. Kelly Crabb makes the content easy to read and understand, and is a must read for novices and professionals alike.

A book by Walter Murch, it is a must read for anyone with an interest in editing. Instead of focusing on the how, it concentrates on the why of film editing. The Academy Award–winning editor and sound designer (forThe English Patient and Apocalypse Now) gives his thoughts on digital editing and looks at the meaning behind the perfect cut, human behavior, and how the blink of an eye is an emotional cue.

A Practical Guide to Filmmaking : A thorough manual on the basics of film production, shot by shot is often listed on many film class’ syllabus. Neatly crafted by John Cantine, Susan Howard and Brady Lewis, it is an illustrated guide to basics such as lighting, sound engineering, and digital editing, thotoughly described through a total of 9, neatly divided chapters.

6.The Reel Truth: Everything You Didn’t Know You Need to Know About Making an Independent Film :

Despite the initial negative impact the book’s title leaves on you, this book ends up as something important in an amateur aspirant’s life. It acts like a parent, guiding you through the initial structuring of your filmmaking brain, and supports you all through the journey. It outlines the path that follows the creative design, the path that includes all the real work, including invaluable advice on music rights, script theft, theater rentals, investors, and even offers tips from directors Danny Boyle and Christopher Nolan.

Education, Tips and Tricks for becoming a filmmaker

7.The Independent’s Guide to Film Distribution :

Even though this one does not come attached with a big name, it is one of the most crucial books for independent filmmakers. Even though distribution is a factor that comes into being a long way off, it is still important, since it is THE step to reaching masses, showing off, to the world, the content that has been created. This guide features acquisition details of nearly 200 film distributors, and provides important insight into distribution processes.

An all time classic, this book was written by John Alton, in 1949, who was an Oscar Winning Cinematographer and Cameraman. It discusses creating movies by comparing them to pictures, painting with light. The book captures his knowledge of shadows, light beams, and visual moods. The most important point and probably the selling point of the book is that majority of Alton’s projects were Noir, and the fact, that he has been able to capture the details of effects of light, despite the fact is commendable.

Listing out the five C’s of cinematography; cutting, continuity, composition, closeups and camera angles, this book captures cinematography at a very basic level. Despite the fact that it was written in the 60’s, Mascelli’s book continues to remain as a tome to capturing the magic of cinematography, despite bearing a few outdated references.

11.$30 Film School: How to Write, Direct, Produce, Shoot, Edit, Distribute, Tour With, and Sell Your Own No-Budget Digital Movie:

This book offers a lot to moviemakers interested in “guerrilla, no-budget, drive-by filmmaking”. Which, in layman terms corresponds to giving the conventional idea of film schools, a finger. Michael W. Dean goes onto explaining the basics of filmmaking in the easiest way possible, while discrediting the conventional, long used methods. Focusing more on documentaries than conventional cinema, it works to bring out focus on your own work rather than other’s.

Straight out of the long standing Dummies book series, this one works the same way as the others. There exists a group of purists who would not want to pick anything that comes out of a series, but written by Bryan Michael Stoller, this book packs the potential and image that it has gained over the years in a variety of domains, and ultimately, it does come with a promise to make a filmmaker out of anyone