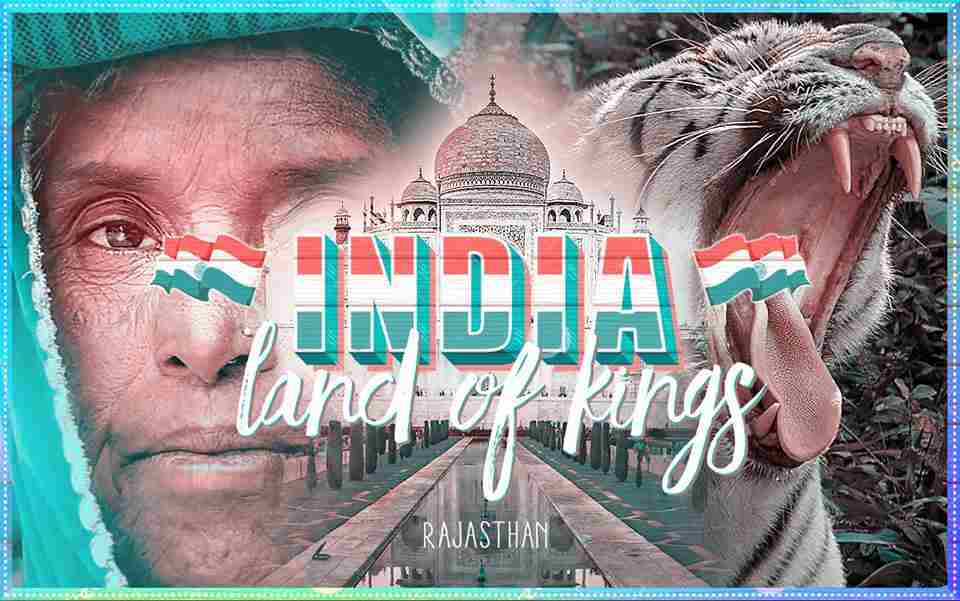 A few days back, there was a mesmerizing Musical film titled “India–Land of Kings” released on Vimeo. A few minutes after the uploading, Vimeo selected the video to their ‘Staff Pick’ category, and then after it has attained mass number of viewers from all over the world. With a mild musical background of an authentic folk song, the film is showing a traditional outlook about the rural life of the Indian States like Rajasthan, and Delhi. India-Land Of kings was directed by Costa Rica based travel photographer Neftali.

Filmmakers Fans got an opportunity to talk with Neftali. He talked with us about the behind the scenes of Making Land of Kings.

Sreekanth: How was the Pre-Production Plan of this Film? Did you have a special Pre-Production pattern? Or, you just came To India and Shoot as Much as possible and then edit It, Is that was the way you followed?

Neftali: No pre-production, in fact, my destinations are chosen by my friends & family. I asked them while I was

still in Turkey.. Where should I travel next? In India or South Africa? 90% of them said India! I was thrilled! – So, I had no plan what I was going to film, but I decided to book flights right away… I decided Delhi, because it would work as my base to plan my trip for the next 3 weeks. So yes, I guess at first it would be shoot as much as possible, but the first week I managed to start a mini-series called “India por media Calle” which means in Costa Rican slang… – India in the middle of the streets … a term we Costa Rican feel very familiar with and immediately everyone that followed me clicked and loved the idea. It consists, of super tiny 1min short films with my gopro experimenting my journey on a daily basis – so the cut end edits had to be extremely fast and not as high-end as my final video “Land of Kings”

Sreekanth: This is a Musical Album, and in which Indian Language did the female singer sung the song? Is the song was recorded before the video shoot or after the Shoot?

Neftali: Sincerely, I have no idea what Indian language it was sung. But, what I did was, before arriving to India I prepared a playlist of music via Spotify. It helps me find a tone and immerse myself in the Indian flare. So I had prepared this list while I was traveling, some were random picks from Indian playlists and others were with Shazam, I heard new songs from drivers on the radio!

I love Indian music, but there was one song that immediately clicked and I loved very much. It’s Ra Rakamura by “Chinmayee” – The moment I heard this song, I knew I had found GOLD! I didn’t work with musicians; I found it perfect for my upcoming travel film.

That song captures, so many aspects of my journey, it has fast paced moments, then slower rhythms along with an incredible chorus & voice. The energy was perfect, and everytime I heard it during my Rajasthan trip, I imagined-how the visuals should be. You can almost say I was putting the pieces together as I traveled along the way. It was magical.

Sreekanth: What were the cameras and Lenses you used for making the Film ? Did you use any special equipments like shoulder-rigs, Boom pole, lights, Reflectors, etc. for making ‘India–Land of Kings’?

Neftali: Ha, great question! Everyone seems surprised when I tell them my gear…

Not even a tripod or monopod, because they wouldn’t fit in my carry bag… and the other one bag took along with me contain Laptop. No extra luggage. So it was super light and I had to really push it to its limits by finding stabilizing positions and or nifty techniques. In Egypt, I had to get on top of moving car myself to make a the shot feel dynamic, people kept asking if I used a drone.. In India, luckily I didn’t have to worry too much about aerial footage, because I wanted a closer encounter with the beautiful people and their daily activities and not the landscape.

Sreekanth: Specifically, I Notices a fantastic shot In between 01: 26- 01:29 time duration. How you created it? Is just a Zoom-in-out shot (or) a drone shot?

Neftali: Are you referring to the hyperlapse of stepwell and my sandals?

Neftali: No drones. Just one photo at every staircase, then I put them together and create a short video.

Right, that is a Hyperlapse. No drones. Just one photo at every staircase, then I put them together and create a short video.

Sreekanth: How You Convinced people for the shot? There were shots taken in Handloom Industry, and open areas (like women collecting water from the well, some kid’s sequences, etc.) I believe that it is not easily as possible. Did they laugh at you, somehow? What was their first reaction when you click the camera?

Neftali: Yeah, it was surprising for me too. I did do a full 15 day drive across Rajasthan city, with a private driver. So, this gave me more flexibility to stop wherever and whenever I wanted. I started along the way to see from the driver’s reference many artisans in many industries, like marble and jewellery across Agra and Jaipur, so a big credit also would go my driver who knew exactly where I could find local workers to explain the craft, along each city I found at least 2 places where locals were working on textiles, carpets and or jewellery.

I even interviewed the owner, so he felt how I important it was for me to document all the process. They were excited to participate!

I didn’t really notice people laughing at me, but most of the craft-workers would definitely ask for some tip or money on the side, which they very well deserved!

I pulled out the camera and recorded a lot, my external drive has loads of GBs of the footages that simply didn’t make the cut in the final film, but only the finest pieces… I plan to reveal more of these behind the scenes later down the road…

Some footage again, like, the woman pulling water were dumb luck moments as we drove through small villages… I would yell and scream to stop the car! Upon seeing these activities and yes the ladies did laugh at me, but soon enough ignored me and kept doing their duty. I also asked my driver to translate for me, so I could communicate with the pottery family, they were so happy about my film; a potter invited me inside his house to film his work and his beautiful family. I had a lot of fun finding those moments and recording them, I knew they were going to be climax moments.

Sreekanth: From the visuals, I can guess this film was shot in Delhi, Agra and Rajasthan. Did you use any Guerilla Filmmaking method? How you manage the crowds? How many shots are there in the film? What was the biggest obstacle you faced in completing this film?

Neftali: Yes, all those locations are part of the film too, as it evolves into Rajasthan. I didn’t want it to be extremely closed to only Rajasthan, since many of the animals, scenes of the introduction were filmed at Delhi Zoo. I am not very aware of Guerilla Filmmaking Techniques, but yes, I had no budget for this film buy my own and all shots were taken along the way spontaneously without permission.

The biggest obstacle for me I suppose was not having enough time. I had to work during my time in India graveyard hours, from 8pm – 6am Monday – Friday on design and adapt to PDT time zones. So I had only 2 hours of sleeps before I would wake up and go out and shoot more footage, but not just for my final film.. But also for my short mini-series which were all done with Gopro.

I was getting very exhausted and got super sick for a whole week, but in the midst of all this I knew I had to carry on … keep working hard and make sure I put my biggest efforts in making this film the best it can be no matter what! I never expected, how well people would react to it, for this I am very humbled and all my struggles were very worth it.

Sreekanth: Who was handled the Editing Department of the film? Is that you or someone else?

Neftali: Myself. All the editing was done 2 weeks after I left India. I prepared all the edit with Davinci Resolve 12. I had never used it before, so I decided to take tutorials and learn as much as possible before diving into the edit itself. I use Adobe Premiere for all my previous films.

Sreekanth : Davinci Resolve, That’s a New Knowledge To Me. Thanks. But, as a filmmaker worked on both (Adobe Premiere & Davinci Resolve) software, can you explain me a bit, which one feels more flexible you?

Neftali: Adobe premiere used to be my editing software.  Now I love Davinci Resolve. Premiere, has many great external plugins and since I am a designer, I use many other Adobe software, so it was easier to learn and use. But.. i wish to move another step for India film…So, i found Davinci Resolve and love it for its incredibly flexible indexing / meta system and amazing color grading tools.

Sreekanth :  I saw, you used fast-editing techniques in many scenes, it’s really stunning. How you prepare for fast the editing technique in Production? Few days before, I asked the same question to a filmmaker. He says ‘I used to, took continuous shots and then I finally edit it. ’ Do you have a specific answer? Like, In terms of Location selection, Matching shot alignment, etc.

Neftali: Fast editing techniques, are very hard to accomplish. I am not there yet, so I will try to give my 2 cents on the matter, because, I use them only to fit along the sound and keep them in tune with the user’s experience. In general, fast paced footage for me has to be very close with your sound mix. Otherwise it doesn’t work. I knew the song used had some excellent moments for using fast paced footage, and or timelapse footage. So I would say, the technique of speeding up, the film has a big influence on the music, but always making sure the film flows nicely towards the next cut / transition.

Sreekanth:  Thank You Neftali. That’s was End of this Interview. I wishing you all the best for your future endeavors.

Neftali: Thank you so much !

Mr.Neftali is an award winning UI Designer, filmmaker and uprising blogger from Costa Rica. He is currently working on his first feature film. You can collect more details about him from here and here.

Continue Reading
You may also like...
Related Topics:Filmmaker Interview, Land of Kings, Neftali

Mirror Filmmaking: Learning Section- the Tips and Techniques are Explained Here
Behind the scenes of making award winning short “Sparks”