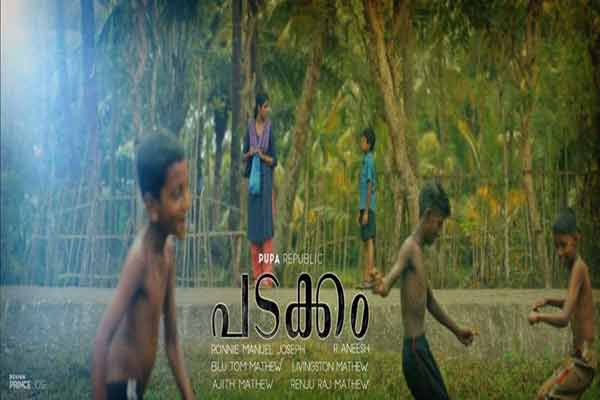 Few days before a well crafted eye opener short-film ‘Padakkam’ was released on You Tube, few days after the uploading, the film bounces its viewers count from zero to beyond a Lakh viewers and was featured in lots mainstream medias. The Story, Sound Design, Cinematography and many other virtual factors of this movie are combined to make an Indigenous style of this film.

Sreekanth: How do you professionally assess  about yourself?

Ronnie :Since from Childhood, I was curious about the Filmmaking technology. I used to watch and observe lots of films made by the all-time-best Filmmakers of the world and that films are enough for inspiring me to become a filmmaker.  My First short Film was “Cinemabaaki ” and “Padakkam” is my second short film. I spend a lot of time on the pre-production of”Padakkam”. I keep on discussing the possibilities and concerns with technically-sound people like Bilu (Cameraman), Livingston (Editor), Ajith (Music), Renju (Sound) and with my co-writer Aneesh.  Frankly saying- I made lots of directorial side mistakes in “Padakkam” and now I am talking you as a proud director of this film is because of the extensive support that I gained from my co-crew members. Thanks to them.

I never obsessed with the genres of movies. I enjoy watching movies of all genres. But mostly I like watch movies, which are deals with the human emotions. The filmmakers like Alejandro Gonzalez Inarritu and KG George made such kind of many movies. Irrespective of the genre, their movies are deals with subtle emotions of the characters, so I think I too enjoy writing and making films that way, giving prominence to human emotions.

Sreekanth: What inspired you to make “Padakkam”? How did you arrive to this unusual subject?

Ronnie: The story of “Padakkam” is purely its writer’s idea. Mr. Aneesh one morning told me the thread. I felt it as good and asked him to keep working on that thread. Within a day, he completed the script and shared it with me. I read the whole script and worked on it further. The core emotion of “Padakkam” is inspired from real life of a person whom we know.

As this film follows the story of a harlot, we were also sure that some people could get offended by this subject.  It happened as we think; people flagged and got it removed from the You Tube at its initial release. Due to that incident we lose 1,000,000 true views.  Then after, we were uploaded the same video again to the You Tube and now it is receiving amassing viewership on day to day. We’re happy with that.

Sreekanth: How you rise funding for making this film?

Ronnie: I am not so financially fit to make a short film; therefore I went for a crowd funding initiative. I put a status message on facebook saying that we are looking for a producer to make a film. That is the way I collected INR 60,000, which I used for making this film.

Sreekanth: What was your casting procedure?

Ronnie: Kani (Female Artist) is an awesome artist; I used to notice her in several movies. After reading the script and thinking about the female lead role, her face was the first thing came to my mind. And the kid is cousin of the writer Aneesh. When we discussed about kid-role, he suggested me that one of his cousins looks similar. So I just went to his place to see him, talked to him and fixed him for the role.

Sreekanth: You’ve maintained particular sorts of color tones throughout the scenes. It worked well. Was it created at the time of production (inbuilt camera settings) or at the Pre-Production (With the help of DI Colorist/Editor)?

Ronnie: We are not big fans of bright color tones. Bilu fixed the shots with such sort of tone in mind and they were enhanced by Livingston (colorist) during the post production.

Sreekanth: Was the sound (Voice over) recorded on location or is it a studio-dubbed version?

Ronnie: It was completely done during the post production stage. We spent lot of time on creating the ambient sound which was a necessary factor for the movie.

Sreekanth: There’s a spectacular shot between 10.00-10.16 time duration. How you created it?

Ronnie: The reality is that shot was happened accidentally! After the shoot of that day Bilu was just talking the reflection of Kani in water (he always keep his camera on to take some random shots even after the planned shots are taken). I noticed someone who was waiting there with a boat for the shoot to get over and pass by. I just told him to move towards the center and pass. While he was moving, we took the shot.  We felt that was awesome and in the post production stage Bilu is the one who suggested inverting the shot. And then the shot got better, added some sort of visual magic and a lot of meaning to the frame; it lifted that total sequence to another level. There are lots of other shots which surprised us and happed accidentally while shooting and I have written a blog on the same. You can see those experiences in this link.

Sreekanth: What’s your opinion about Filmmaking?

Ronnie: I answered a bit about it in the first question itself.