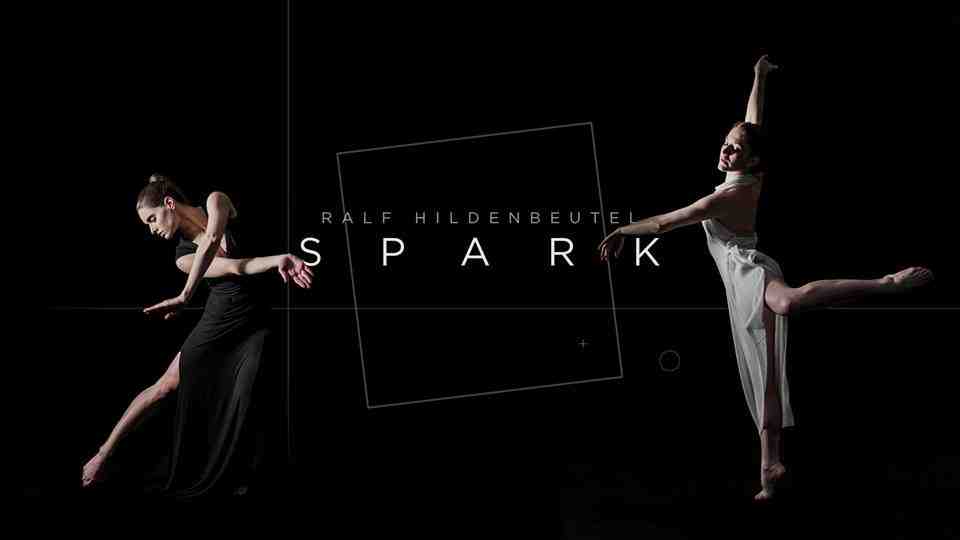 Begins with a Choral background music along with a performer and then one more comes and those twosomes were performed in according to the criterion of the background musical, video titled as “Sparks” made by the Berlin-based filmmaker Boris Seewald and composed by Ralf Hildenbeutel. The frequently appearing Lucent lines and the geometric icons in the white-black milieu of this video causes to produce the powerful impacts. The Performers Simone Schmidt and Althea Corlett’s spectacular recital alongside of the audio visual juxtaposition is also a mentionable thing in this film.

Filmmakersfans got a chance to interview Mr. Boris Seewald, he explained with us the behind-the-scenes of making “Sparks.”

Sreekanth: Before start taking about the Movie, for our readers give a small about outline about Boris Seewald. What made Boris to become a Filmmaker? As a filmmaker, how you feel while on sets?   And, what kind of films you want to direct?

Boris: I am a Filmmaker and Film editor based in Berlin. I have a great musical background; I became a filmmaker by doing little music videos for my own band. My First short Film was “Momentum” and after that I did music videos like “The Fest” and “Spark.” My Films were premiered in film festivals like BootBooHook Festival, TED, International Festival of Documentary and Short Film of Bilbao, BBC Music Video Festival, & more. In the beginning times, I learnt Filmmaking techniques self, with a cheap camera and computer to edit the clips for my music band and that kind of self-learning helps me a lot to understand my mistakes and weakness. I’d like to work on experimental films.

About being on the sets:

Being on the sets is actually finishing your homework. There I have to talk with the DOP about the shot lists, coordinating artists and other Production Members. I like to be prepared well and write it all down and do sketches what I want to shoot. On the set there are too many other things to take care of… So for easiness, I always take production notes.

Sreekanth: I am also curious about the making of this ‘ Ralf Hildenbeutel.’ My first question is, how’s the preproduction of the film? Especially, I want to know about the Storyboard and Script preparation. How long it took to complete?

Boris:I had the music (BGM) for the video that I am planning to produce. Upon that, I contacted two dancers and we worked out the choreography. At the outset, for a reference, I filmed randomly with a Mobile phone Camera. Then after, I had approached the DOP and then started preparing for the shotlist. We’d discussed every moment about the choreography, how to shoot it, Camera angles, about various Camera movements to use like dolly, tripod or handheld and also discussed which frame rate we need for each shot because some parts are in slow motion and some are in higher frame rate. Basically, we made a sketch with a top-on view where we placed the dancers and camera for each single shot. At the same time, I was experimenting with the animated graphics.

Sreekanth: The artist’s performance is the indispensable part of film. How you trained the actors? Who did the choreography of this film? As a Filmmaker, what’s the biggest challenge you faced in the choreography?

Boris:The performers were professional dancers and they worked out a choreography based on my concept, which I explained to them. I made sure that they understood what I want and how I want to saw it on-screen. Based on that, they worked something out and I feedbacked them. Step by step it came to the final choreography. It was important for me that the dancers have as much freedom as possible, since Filmmaking is always teamwork and it’s nice when the creative part has contributed by many and not only one brain.

Sreekanth: From the Visuals, when the background turns to black, I saw different white-color outlines that in Triangular, rectangular and spherical shapes are popping up on screen according to the artist’s movement. It really works. But, whose idea was that? Is the idea was came into your mind since from the pre-production or just in post production?

Boris:The geometric shapes were planned from beginning of the production stage. Originally, I had much more sorts of shapes in mind and also other things of techniques. (E.g. including particle animations) In the postproduction, I removed more and more original ideas I had about the graphic animation. Since the editing is sometimes really fast and flicking alot between white and black, I had to be minimalistic with the animation. In the end, I removed many animation ideas and I only used 3 types of shape: lines, rectangles and circles…. not more

Sreekanth: Boris, can you specify some visuals of this video (in reference with the running time) that you used animation the most?

Boris: I think from 00:10 to 00:19 contains all shapes that I used Animation. Mostly, the straight lines that are going quickly behind the performer are created with Animation. Some shapes are animated with a movement, but many shapes are just put in for one or two frames.

Sreekanth: I hope you didn’t use a chroma sheet background in this film. Right?

Sreekanth: Okay. Then how you made that white and black color in the background? Was it a specially designed cloth or something?

Boris: The white was just a wood wall with a concave fillet painted white. It wasn’t a cloth. The black was just a-

mollitan hang over the same studio. It was the same set.

Sreekanth: what does the term ‘mollitan hang’ refer to?

Boris: Molitan is a black cloth that absorbs light. It often used in Indoor Film shooting and here for creating the effect we hang it over the white background.

Sreekanth: As  like Choreography, the lighting is also very important in making of this film, especially there were too many Silhouette shots in the film. Give me a small outline about it.

Boris: Okay, very briefly: In the black background scenery we put one light from the left, one from the right. The lights were attached to a dimmer to regulate the strongness of the light… We had a person to swap the left light to the right light and back etc. While the performers were dancing, the lights went on and off constantly and thus we’d create the twinkling effect.

Sreekanth: What about the Filmmaking Gears you used to create this film?

Boris: About choosing gear:- It is also a question of budget. Since this production is super-low budget, we had to carefully choose what we need. Next to the camera, our main gear was a dolly, a crane and a shoulder rig for handheld camera.

Sreekanth: The “Shot Continuity” is major factor of this film, especially when the both the artists appeared on screen since after 01M: 53S. You did a great job. I want to know about the pre-preparation that you had taken to achieve to flow your film perfectly without any continuity mistakes.

Boris: Basically we were filmed “by chance.“ It sound silly, but that’s what we did. We thought, if we shoot each take several times (and dancers are good in repeating the exact same movement), there is a high chance, that continuity will be there. And that’s how it worked.

Sreekanth: Your POV about Filmmaking

Boris: Well…That’s a Tuff Question. My Personal Opinion is… Try to make the film you would like to see yourself and don’t do a film because you think that’s what the audience wants and stay true to yourself.

Download this File to see the Pre-production plan of this film. (Reusing of this file without a proper Link back to this source page is not allowable)