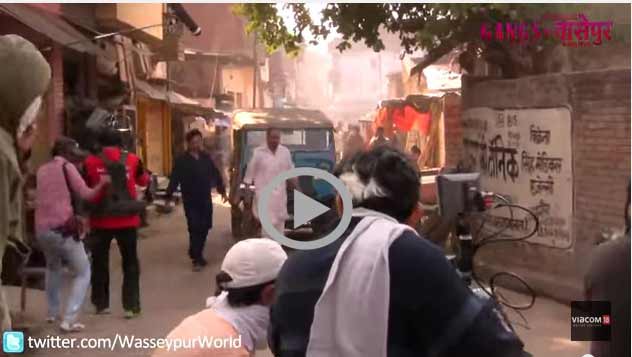 Catchy Songs, Memorable Dialogues, Action, Comedy, Romance. It has all the elements of a ’70s Bollywood Potboiler yet Gangs of Wasseypur shines bright in its own color. Its treatment of a complex plot, vibrant characters, intricate details, editing style, music and Sound Design makes GoW a lesson for all future filmmakers. The making of this movie was not easy. The film had a very low budget and the team had to think of innovative cost effective ways to shoot.

Gangs of Wasseypur is almost an accidental project for Anurag Kashyap. He produced a play written Kalki Koechlin and was waiting outside the theater when Zeishan Quadri (who later played ‘Definite’ in the film) came to him and asked him to listen to a script he wrote about the Wasseypur Mafia. Kashyap had some time to kill and he agreed. After listening, Kashyap liked it but he thought this was not original and the same things were done numerous times in Western Gangster Films. Zeishan then convinced Kashyap that this is the real story of Dhanbad Mafia and most of the characters & stories are real. Kashyap then re-wrote the screenplay blendinf real incidents with imagination. The characters were also renamed but they were modeled on real people. Ramadhir Singh is based on Surajdeo Singh, Faizal Khan on Fahim Khan, Fazloo on Shabir Alam.

The film launched the career of some of the most talented actors in Indian Cinema- Nawazuddin Siddique, Richa Chadda, Huma Qureshi and Rajkumar Rao. Piyush Mishra who played the narrator Naseer is a NSD graduate and has been working in films from quite some time. But, this role is perhaps one of his most memorable one. Director of acclaimed films like Paan Singh Tomar, Saheb Biwi aur Gangster Tigmanshu Dhulia played the role of Ramadhir Singh. Kashyap gave Piyush Mishra the option to choose between Naseer and Ramadhir, Piyush selected Naseer.

Anurag Kashyap confessed that GoW was his most difficult film. It took the life of his chief Assistant Director Sohil Shah who died in an accident while shooting for the film in Banaras.

Before the shooting of the film, there was in-depth research conducted by the team who interviewed people from Wasseypur and Dhanbad to make the film as realistic as possible. While researching the team was convinced that shooting could not be done in Wasseypur. Kashyap then decided to film it where he grew up in UP. He got a lot of help from people who knew him as a child. He told in an interview that if he didn’t get help from local people the film’s budget would have been 80 crores instead of 18 crores.

The filming was also very troublesome as they were constantly threatened by local goons. Since Kashyap wanted to shoot in real locations, the actors had a hard time. While shooting in the slaughter house, actor Vipin Sharma vomited every time after a shot. Another problem they faced was crowd controlling since many of the scenes were shot in crowded marketplaces. They also used Guerilla style filmmaking to shoot some scenes especially the chase sequence between Definite (Zeishan Quadri) and Shamshad ( Raj Kumar Yadav). The actors didn’t even know where the cameras were.

The film uses Chutney music which is a fusion of Bhojpuri folk songs and Carribean Music originated in Trinidad in the 1830s. Composer Sneha Khanwalkar travelled to Trinidad to research and learn. One of the most popular song from the film “I’m a hunter” was a remake of Chutney Musician Vedesh Sookoo’s song I Aint Ride No Bicycle.

The film also uses Bihari folk songs and uses arrangements that reflect the folk culture of the region. Most of the songs are sung by non-professional singers to produce that raw realistic Soundscape of the film.

The making of Gangs of Wasseypur is such an interesting tale that it was later released as a book by Harper Collins.

(Crew Speaks Behind The Scenes- Gangs of Wasseypur)

Continue Reading
You may also like...
Related Topics:Anurag Kashyap, behind the scene, Gangs of Wasseypur

Film Suggestions: Eternal Sunshine of the Spotless Mind (2004)
Under Scrutiny: Film-The Rules Of the Game (1939)