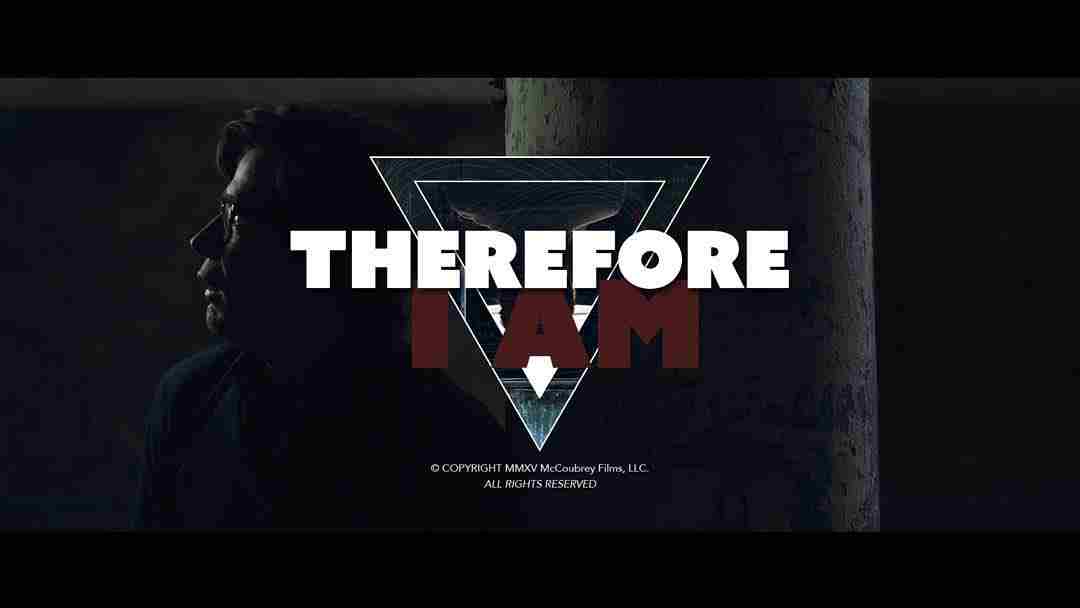 A radical change is always happening in Filmmaking when the Filmmakers come up with the thundering ideas, which can attract and influence at least a kind of people. By all means, a good Filmmaker should be a researcher and in his every film he can itself discover something newer than his last release. That’s really called Experimental Filmmaking.  There’s a brilliantly structured sci-fi psychological short namely Therefore I Am made by the twin Filmmakers PETER McCOUBREY and LUKE McCOUBREY (Commonly Known as McCoubrey Brothers) has all such a symptom of an Experimental Film. Due to the variety in filmmaking, this film has already esteemed by the numerous viewers on video-sharing web pages. In this interview, McCoubrey Brothers discusses about the crafting of Therefore I Am.

(This Interview Secession was Conducted By Agin Gosh Of Filmmakersfans.com)

Agin Gosh: Before Start taking about the Movie, for our readers give a small about outline about Peter and Luke.

Peter & Luke: We both grew up watching and loving movies. We use to always shoot little video sketches on VHS–

with our friends that we would edit “in-camera”, but it wasn’t until high school when an older friend came back on summer from his freshman year at art school with a Super-8 camera that we really experienced the joy of filmmaking. Shooting real film, sending it out to get developed, splicing it together, adding music and sound effects on the projector, then projecting in on a bed sheet was a totally new and thrilling experience for us. That summer has changed our life and it set us on the path of going to film school and pursuing a career as a filmmaker.

Peter: Another key factor that happened a few years prior to that summer was the discovery of two particular movies. The first was Stanley Kubrick’s “A Clockwork Orange”. That same older friend with the super-8 camera, Jason, had a poster for A Clockwork Orange on his bedroom door and I had always assumed it was some cool rock band that I had never heard of. Anyways, I found the film on a shelf at the video store and rented it with my friends. The movie was unlike anything we had ever seen before. It blew me away. I didn’t immediately like it, but I was attracted to it in some way and ended up revisiting it many times in my teenage years. Eventually, I came to love it and that’s really when I realized what a director was capable of creating.

The other film was Terry Gilliam’s “Brazil” I similarly stumbled upon it because my father was a huge Monty Python fan. I knew it was supposed to be funny, but I totally didn’t get it, it made me feel anxious, yet it was gorgeous. I now consider it one of my all time favorite films, but at that young age it started as a mere curiosity. I think some kids shy away from things that make them uncomfortable, but it was that initial discomfort that led to the curiosity that ultimately led me down the path towards seeking out more interesting and alternative cinema.

Agin Gosh: Why Peter and Luke McCoubrey both joined as the co-directors of the film? What was the biggest obstacle you each one faced while co-directing the film, like disputes, arguments-one over the other etc.? Likewise, what were the some merits you found in co-directing than working as an independent filmmaker?

Luke: Well we’re brothers. So it’s very natural for us to work together. We’ve been doing it most of our lives… there’s a short hand that exists that we might not have with someone else. I’m the writer and Luke is the cinematographer so on set our roles are a bit more clearly defined then some other directing teams. I work with the actors (with Luke occasionally weighing in) while Luke works with the lighting and the camera (with me occasionally weighing in).

We don’t really have many arguments… occasionally, some minor frustrations, but it’s been a long time since we’ve had a full blown fight. We’re pretty much on the same level of what we want the film to be. That’s part of the reason we work so well together. Having a partner is just a great support system, there’s always someone to bounce ideas off of… if you have a crazy idea, there’s someone there to tell you you’re not crazy.

Agin Gosh: what led you to make ‘Therefore I am’?

Peter: Last year, we made another short film called “The Grey Matter,” was an 18 min horror comedy that had its fare share of online success. After a full year of doing the festival circuit with varying success, we had an explosion of feedback and support upon the film’s internet debut. Based on that online buzz we were even contacted by the movie studios, Hollywood agents and managers.

As the initial buzz for that film started to wind down, we wanted to chase it by making another short film. We knew we wanted to make something that we could turn around quickly and cheaply… as we had depleted much of our savings making “The Grey Matter”. We love genre films and wanted to make a sci-fi film that was rooted in a strong concept and didn’t need any flashy VFX to make it interesting. I had always wanted to make a time travel film that adhered to a different set of rules than what we’re used to seeing in popular cinema. I had totally different idea that utilized this “many-worlds interpretation” version of time travel, but that story wasn’t very budget friendly. So I took the core idea from that story and wrote “Therefore I Am” in one afternoon. We shot it over a weekend utilizing the equipment from another shoot that Luke was DPing.

Agin Gosh; What were some of the biggest challenges you faced in making ‘Therefore I am’?

Peter: The biggest challenge was working with very little money and very little time. That just forced us to make very clear cut decisions as to what we could and couldn’t do. Our production was very intimate and had to operate extremely efficiently.

My other big concern was casting. No matter how good a film is written or shot, it can all fall apart with bad performances. We needed first to find an actor to play the Older Herberts that could make them all feel unique, yet from the same DNA, and in some case with just a single line of dialogue. When we met Kevin we immediately just clicked and got a magical feeling from him. He totally got our weird little script and elevated it in ways we never even imagined. All of our films have a certain oddness and quirkiness to them that could easily sway into the world of camp, but Kevin kept the characters enigmatic, engaging and left you wanting more.

JD Taylor plays younger Herbert and in many ways he had the less juicy of the two roles, but he played off Kevin so well, he just shines in the film. He was able to do so much without using any words. There’s a moment in the film where the camera just slowly pushes in on him as he ponders the situation and  then something clicks inside him and he decides he’s had enough. That wasn’t in the script, JD made that moment and we love it so much. We couldn’t be happy with their performances and hope to work with both actors often in the years to come.

Agin Gosh: Give Me an Outline about the costume design and Prosthetic makeup of the film. How long it take to complete?

Peter: Our sister Jaclyn was the costume designer. She works as a wardrobe stylist for print and TV commercials. So this film was a real family affair. I had written certain elements for each character in the script and told Jackie to take my lead and run with it. We didn’t have any money and I think she did an amazing job working with practically nothing. Many people have complemented the costuming of the film and that a huge testament to her skill and eye for detail.

The prosthetic makeup was done by Anna Bearman. She has a background in makeup fx and again, she was working-

Cast & Crews Behind the “Therefore I Am”

with practically nothing. We had an ambitious amount of looks to pull off… and we had to do every look on both days of our two day shoot, in the apartment and in the warehouse basement, and I can’t believe we pulled it off. She did an incredible job working with very little. Her job was the scariest aspect of the shoot for us, because we had no idea if it would work at all. We really wanted the film to have a surreal aspect to it and I think the work she did along with my sister Jackie really helped us achieve that necessary aesthetic.

Agin Gosh: Which camera and Lens you used for making? Was the artist’s voice was recorded at on-location or is it a studio dubbed version?

Peter: We shot on the Arri Amira and a set of Zeiss Super speed lenses. All the voices and sound were recorded live on location. We had the actor Kevin Breznahan (older Herbert) record some extra lines afterwards, but we ended up cutting them from the film.

Agin Gosh: There’s a transition pan shot between the 2.27-2.35 time duration. How was the actual creation behind those visuals?

Peter: That sequence is very simple. We had the camera on a small slider that we would slide back and forth to reveal the actors. When the camera whip pans back to Kevin, there is a hard cut hidden in the motion blur of the “whip pan”. We changed Kevin’s wardrobe and whipped the camera in a similar fashion without changing the lens or camera position. The fast movement of the camera hides the cut point.

Agin Gosh: About the sound designing..

Peter: Alberto Leon was our on-set sound recordist and the sound design for the film was done by our composer Ron Patane.

Agin Gosh: Finally, Do you have any nice advice for the aspiring Filmmakers?

Peter: We live in a time where the tools to make a film are very accessible. Back in the day 35mm film cameras and gear were highly specialized items that we’re practically unattainable by people without any connections to the industry. Nowadays, you can shoot a beautiful highly cinematic film on a DSLR and edit it on your laptop. My advice is, amass some cheap filmmaking gear and start making films and then upload them to You Tube or Vimeo and use social media to promote them. The more you do, the better you’ll get, and eventually if your truly passionate and have interesting things to show the world the world will take notice.

Continue Reading
You may also like...
Related Topics:McCoubrey Brothers, Therefore I Am short film