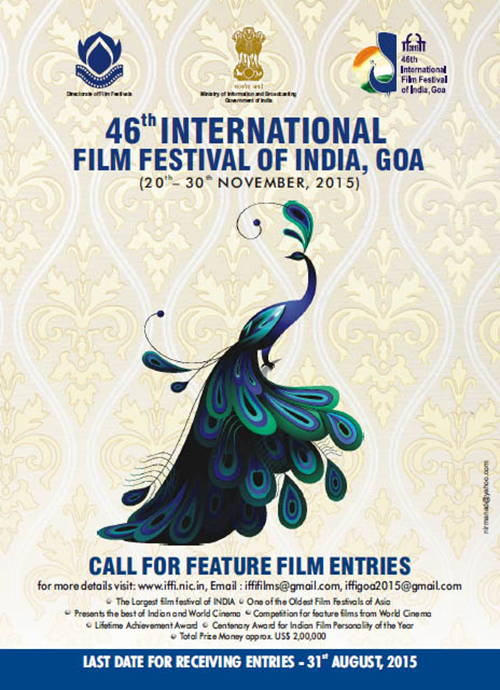 International Film Festival of India (IFFI) is one of the best Indian film festivals annually held in panaji, Goa since 1952. Every Year the festival IFFI has receiving huge counts of submissions from different countries that are categorized for the sections of Short film competition, Feature film Competition and Documentary Film Competition Section. IIFI is an inspirational and a motivational event for all the filmmakers across the globe, each year it displays the rarest and magnificent films that were selected by an effective jury panel team. So that is the reason why IFFI is the favourite destination of film aspirants and it can be visualized from its rising numbers of viewers count on each of its festival secessions.

International Film Festival of India was founded By film division, Ministry of Information and Broadcasting Government of India in 1952. The festival was inaugurated by the first Prime Minister of India, Jawaharlal Nehru in 1952  at Mumbai and latter to other Indian cities Madras, Delhi and Calcutta. From 2004 onwards IFFI declares its homeland as Panji, Goa. Every year IFFI held in between   20 November to 30 November (Considerable for IFFI’S 46th, 47th, 48th, 49th secessions)

IFFI is organized By Directorate Of Film Festivals (DFF), Ministry Of Information and Broadcasting, Goa State Government and Association Of Indian Film Industry.

IFFI’S competition is broadly divided into three sections. Filmmakers or official representatives can submit their film to these sections, in according to IIFI’S mandatory Criteria’s

Non- Competition (Cinema of the World)

The submitting feature film is considered as eligible only when it is a fiction and it need total running time not less than 70 minutes. If that film is not in English language, then English subtitle must be added in according to Original Sound Track

This is a screening Section of International Film festival Of India for documentary, animation and short films. This section is not listed in the main stream competition category of IFFI; also it would be altered in according to subject norms. You can get more details from Festival office.

Your film must be received to the festival office on or before 31 August, 2015.

(b) Director to be given the Golden Peacock and a certificate in addition to the cash component.

( c ) Producer to be given a certificate in addition to the cash component.

(v) Special Jury Award :       Silver Peacock, Certificate and a cash prize of `15,00,000/- given to a film (for any aspect of the film which the jury wishes to award/acknowledge) or an individual (for his/her artistic contribution to a film). The award, if given to a film, will be given to the Director of the film.

Silver Peacock, certificate and cash prize of `10,00,000/- is granted to a person on the basis of his/her outstanding contribution to Indian cinema

Ministry of Information and Broadcasting, Government of India

All correspondence, publicity materials, DCP, DVD’s and film prints of the selected films should be addressed to

Ministry of Information and Broadcasting Government of India

Now What You Think About IFFI ; Any Doubts? Ask To Us , Replay sure