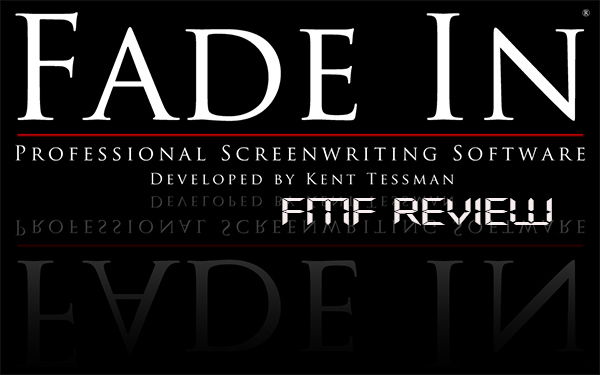 This is the first thing that we point-out in Fade In; it is programmed totally in a user-friendly way. Unlike other scriptwriting software, fade in’s home screen looks simple and easier to understand. To a better extent, the Developer Kent Tessman succeeds in creating a simple and effective home screen; also, the black interface helps the writers to avoid the usual distractions like eye blinking, watery eyes infection and Computer vision syndrome (CVS).

The writing style is similar as like other script writing applications: on the right hand side quick navigator options like scene headings, action, character, dialogue transition and shots are placed. As compared to other screenwriting software, this writing format feature is quite easier to understand. Meanwhile, you can also prefer the option “Unformatted text” if you are writing some random texts.

Another important feature you can save as a fountain (.fountain) file, which means your script will open in all the word processing applications. In addition to this, you can save the file to any other script formats like XML, plain text, HTML, PDF and Rich Text Format.

This application is having an awesome error finding feature that helps to detect the errors on the basis of unwanted spaces, blank lines and standard script formatting. This helps to give a standard look to your script. Fade In Comes up with a default category of 12 (Courier Standard), also you can change the font size and font family if you wish.

We found out some Well planned Production Options are Integrated In Fade In.  ‘Scene Omit’ is one such a feature that we noticed in Fade In, it helps you temporarily removing a scene without changing the whole scene order and the omitted scene will appear in your document with a small cross Icon. At any point of time you can add the same scene (Omitted) to the original source by clicking “Unomit” option.

Similarly, another outstanding production feature of fade-in is auto-generating reports such as Scene Reports, Cast Reports, Production Reports, Location report, Synopsis Report and statics Report on the basis of your script.

As compare to Final Draft, Movie Magic Screenwriter and Celtx: the pricing of Fade-in is comparatively less. $49 is the pricing of its full version you can buy it online through their official webpage.

Fade-in hasn’t had a phone or chat support, instead they offer support through email address and social websites like Facebook and Twitter. But it is faultless, we found their support team responds to all the customer’s queries added in the product forums and their social sites.