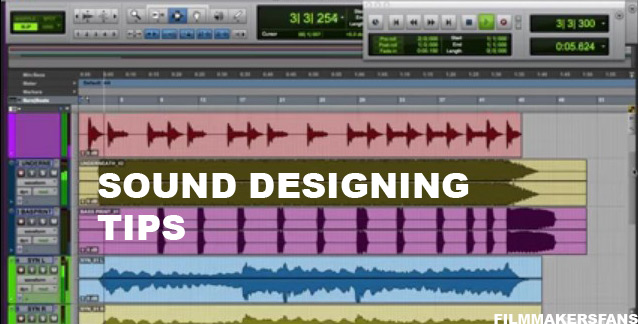 Sound in Film is much more complex than it seems. When watching a film, we almost ignore the layers of sound. But, our sub-conscious mind is working on decoding these layers to make our film watching experience more exciting. In the first part of the article, we have already discussed the components of Film Sound. Check that out, if you still haven’t read that Sound Designing Tutorial portion.

In this part we’ll discuss the different people who shapes the sound of a film and how. Most of the time the word “Sound Designer” is used to mention the Sound Artist, but it’s not quite right. Sound Designer is a like a supervisor, but there are a lot of people who works on various parts of film sound. We’ll discuss what a Sound Designer does later. In a big budget production, a sound team may consist as many as 35-40 people. Even in a low budget film, there are atleast 7-10.

In the production stage, the film is shot on location or on sets. Here mainly two types of Sound Artist works.

He is responsible to record all the sounds in a film set or location. He decides which microphone to use and also the microphone positions. There are two ways of recording sound- the single system and the double system. The Single system records the sounds directly to the camera. The Double System involves another dedicated recording system to record the sounds. The Single system in now almost obsolete, it is sometimes used in amateur filmmaking like some short films on YouTube, the sound often has high amount of Wind noise. Serious filmmaking uses the Double System to capture clear sounds. In Sync Sound, the sound recorded by the production Recordist is used in the final soundtrack of the film. But, in ADR, the production sound is used just as a guide for the actors to reproduce the dialogues with same tonal qualities. Sync Sound needs high end microphones to eliminate location noises and hence needs a high budget, hence low budget films in India still uses ADR.

A Boom Operator holds the mic in front of the actors. The mic is often suspended at one end of a stick called Boom Pole. A Boom Operator works on the instructions given by the Production Recordist on how to position the mic.

A Sound Editor selects and combines each and every sound for a scene in a film, i.e., dialogues, music and sound effects. In a big budget production, there will be three different Sound Editors handling each of the three major components respectively.

i. A Dialogue Editor takes the production sound and edits it in such a way that the transitions from scene to scene are smoother and doesn’t seem disoriented. He also designs the background sounds so that they don’t interfere with the dialogues.

ii. A Sound Effects Editor is responsible to make specialized sound effects. He may use some stock Sound Effects library or make Sound effects completely from scratch. The Sound Effects also includes Foley Sounds. Some films may have a dedicated foley editor who solely handles the foley sounds.

iii. Music Editor who edits and syncs the music to the visuals. Sometimes, he creates a “temp track”, which is a temporary track of some previously composed music which has the same mood or feel that the director wants. A Music Composer is then asked to create original music based on that mood or feel. Temp tracks are used in the editing stage as the new compositions are often not ready during editing stage.

An ADR Recordist records and mixes the dialogues that are performed by the actors in a Sound Studio using the production sound as a guide. Low Budget films rely heavily on ADR because they don’t have the budget for expensive microphones needed for sync-sound. Also, Sync-Sound is still new in India and there is a lack of skilled people who can do it. Sync Sound also uses sophisticated post-production techniques to remove noise from the production soundtrack. But, sometimes even they need ADR to replace the unusable production track because of high noise that can’t be fixed.

Mixing is the last stage in creating the final Soundtrack of a film. A Re-Recording Mixer combines all the components of sound and mixes them. He uses various techniques like Normaliztion, Equalization, Compression, Fades, etc. to create a perfectly balanced soundtrack in which dialogues, music and effects blends in such a way that they don’t interfere with each other.