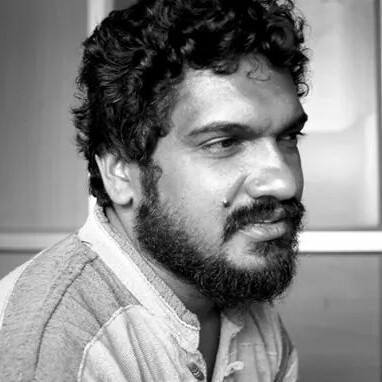 Year 1986. A young dynamic director, fed up of the money-minded market forces, makes a film with money collected by travelling from village to village and house to house, beating drums, singing and putting up skits and short plays at street corners. Director John Abraham, his film “Amma Ariyan“

Dhruvan : What was your inspiration to make this film?

Sanal Kumar : The world which we live in is considered to be a Man’s world. Everything is designed by him and a woman accordingly follows the system diligently. Whereas the truth is, man in nature,is a very fragile being. The exterior sturdity that he wears upon him is a very delicate and superficial armour that falls flat as we go deeper. It is this helplessness of a man, in a relationship that he pursues, that I wanted to explore in this film, where man looks at him objectively.

Dhruvan : How did you arrive at the decision of doing a film through crowd-funding?

Sanal Kumar : When I started off doing short films, I understood that no producer would be willing to spend money for my kind of cinema. So, that is reason why I decided to find funding through the Kazcha Film Forum. Thanks to the good minds who donate funding for making my films without aiming a financial Interest. ‘Oralpokkam’ is one of the biggest crowdfunding films that we made on the banner of Kazcha Film Forum. You can find the cash flow statement of oralpokkam in our webpage.

But, there was a time; I was totally depressed of oralpokkam because the film didn’t acclaimed anywhere and even not opens to the criticisms. Things are changed after it got selected in IFFK (International Film Festival of Kerala) 2014. In the Festival, it got NETPAC and FIPRESCI awards for best Malayalam film and people started to talk about it. Later, I got best director award in the Kerala State Film Awards 2014 and it got award for best location sound recording also.

Sanal Kumar :Kazhcha Film Forum is a Thiruvananthapuram-based film society comprising of young film enthusiasts. Unlike other film societies around, Kazhcha Film Forum was not just about film screenings and cinema education. It also facilitated the actual production and making of films. “Parole”- one of my first experimental films was produced by kazcha with the money collected from a group of bloggers. Few years after that, I again directed a short film ‘Frog,’ which was also a crowdfunded movie and it won best tele-film award in 2012.

Kazhcha’s latest initiative is called The Cinema Cab, comprising of a high quality projector and other equipments, which will screen films before select gatherings with the support of local film clubs and societies across the state. Our primary motive is to create an audience for the movies which are normally sidelined by the theatres. By contribution from the public we do not aim at making profit though we are trying to recover our cost of production.

Dhruvan : How difficult was it convincing the investors for the film?    Was there any kind of financial expectations?

Sanal Kumar : I met a lot of people through blogs who watched and appreciated my work and later approached me to make more films. They were very clear about my filmmaking sensibilities and had confidence in me. There was a mutual understanding and desire to make good cinema. They were not at all materialistic and expected no financial returns.

Dhruvan : How did you overcome the budget constraints of such a crowd-funding production?

Sanal Kumar : I was quite concerned about the money spent on the Production. Initially, the flow of funding started with 30,000 rupees and we began shooting with just a camera and a tripod. A jimmy jib for camera was built by a friend of mine. Almost all the cast and crew participated in the project worked for free and only very few people worked for remuneration.The film was shot on cameras like Canon 1DC, Canon 5DIII, Red MX and Gopros and had on-location recording sound. But, never even once our schedule was disrupted due to lack of funds. We have only spent like we were on a wild and adventurous journey.

Dhruvan : In the film there was a jeep travelling sequence, where the camera felt very shaky and bit unprofessional. Was that a conscious design or a technical compromise due to lack of funds?

Sanal Kumar : I dont deny the fact that there were no compromises. It was partly wanting to give an unpolished, raw look and partly lack of adequate equipments and rigging in those hilly terrain was there. I however take limitations as a challenge and open myself to see it as an artistic process of experimentation.

Dhruvan : About 80% of the film was shot in Uttarakhand. What were your experiences shooting there?

Sanal Kumar : Personally, language was not a problem for me and found it much easier to shoot here than Kerala. The rural inhabitants were very co-operative and positive towards us though the climate and the terrain was difficult.

Dhruvan : How was the response of the film after the release?

Sanal Kumar :The film received good ratings and a lot of positive responses from the audience. They have started going to the theatres and appreciating it.

Dhruvan : You recently spoke up against the decisions of KSFDC (Kerala           State Film Development Corporation) regarding your film. What were your grievances raised against them?

Sanal Kumar : Despite a decent showing at the box-office, KSFDC reduced the number of shows of “Oraalpokkam” to just a 10 am show in the morning. The officials are however giving all sorts of absurd and illogical explanations for the same. It is very sad to witness such indie films neglected in this manner. To accomodate mainstream mediocre films, my film is not given a fair chance in the market. Through word of mouth the film is getting a lot of publicty now. Instead of nurturing it at this crucial time, removing it is very unfair.

Sanal Kumar  : My second feature “Ozhivudivasathe Kali” has been completed. Fortunately, we got a producer this time and is being premiered in MAMI festival this year. I have tried out some experimental approach of shooting without a script with some new actors. An interesting portion would be the second half of the film which constitute of a single long take of 52 minutes.

(Click Here To Join his New Film as a Producer)