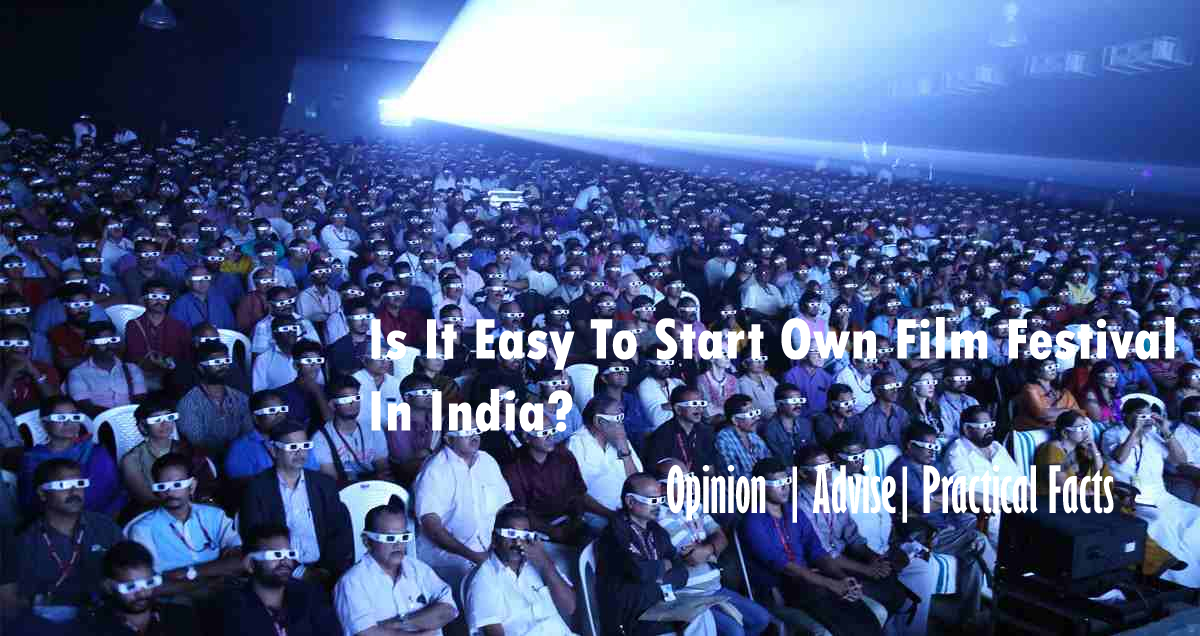 How to start an Own Film Festival in India? How Much Cost it actually needed. Solutions are here. Festivals are synonymous to festival, life and exuberance. However, if you talk to the organizer of any festival, you will hear a different story altogether. Curating any festival can be a real pain in the neck, especially a film festival. With the high-speed internet at fingertips, most of the people have no interest in paying for obscure films. Unlike many other festivals, film festivals rely on their niche audience. So, how hard or easy is it to start your own film festival?

And so after discussing a few pros and cons of a film fest, let’s discuss how to do it. Here is a step by step ‘How to Start your Film Festival’ guide for dummies.

Step 1: What is the first thing you need to start your own film festival?Films? Filmmakers? Sponsors? No! The first thing any film festival needs is a location. Be is Sundance or a small time film festival in a small alley of a tier 2 city of India, all film festivals need a place they can call home. So if you are planning to start a film fest, scout for a good location that can not only house a big audience for multiple screenings, but can also accommodate spaces for discussion panels, food stalls, toilets, meet and greets and a lounge to talk, chill and sleep.

Step 2: After you get a venue that fulfils even 80% requirements listed above, start worrying about the next most important thing — Films ! Just because you are starting a film festival does not mean you should accept any and every film submission. The kind of films you choose to screen in your fest will establish your image in the market. A good way to get the most number of good submissions is to start a Short Films Festival. Short films have been considered as the kiddie pool for budding filmmakers, but today they have become a monster of their own. A lot of renowned filmmakers are now making short films to tell the stories that are very close to their hearts. In short, Short Films can bring in big names and money.

Step 3: So once you have your catalogue ready, all you need is a little capital to stand on your feet. For this, you need to take off your artistic hat and put on that shrewd businessman hat. But don’t worry if you do not own such a hat, you can always rent one. The best practice is to hire a marketing person (from your own budget, or promise returns from the festival), and get them to get you the sponsors and money your festival needs. This is the most painstaking process after scouting a location. But where the location does not break your heart or disappoints you, finding the right sponsors can give you many sleepless nights.

Step 4: After a sponsor, you need to get a known name or face to bring people in. Yes, every festival needs a star. Though you don’t need to bring a big wig, but make sure that the big names you bring resonate with the theme of your festival. Chetan Bhagat has no place in a film festival.

Step 5: Okay, let’s hope you have a list of start guests and great sponsors now who are footing the bill for this fest. First of all, give your marketing person a big hug and a kiss (pat your back if you are that person), and then start making a catalogue; a real one; in print! Statistics have shown that the film festivals that put out their schedules and material weeks before the event get the most number footfalls. So, don’t keep your print and promotional material at the back-burner (or “We would publish when we will have the final list of screenings and guests.” attitude). Once you lock down your primary schedule, put the word out. Get your marketing person on it and let people know about your event and what is going to happen.

Related Read:  List of All Film Festivals in India

Step 6: But before you start beating your promotional drums, there is one more thing that you need to fix. With the rapidly changing trends in the economy of Indian cinema, you need to make sure that the prices you decide for your festival entries are not only reasonable but also competitive. Nobody is going to spend 300 bucks for a one day pass for your film festival when there is a new blockbuster running in a cinema near your venue. Making money is not the primary aim of a festival, it’s to introduce people to the wonderful films that are not known.

And now since you have almost everything in order, let’s just hope that everything goes as planned (though you should make a little room for Murphy’s Law). The basic idea of a film festival is to enjoy and discover fresh films. But sometimes film festivals fail due to poor administration and lack of planning. In order to ensure that your film festival does not have the same fate, you must push the envelope further with each edition. Plan for the fluctuation of people coming to your film festival and always have a backup plan ready for any kind of technical glitch. Respect your patrons and the volunteers who work for free.

Not even Sundance goes smoothly. Even the biggest of film festivals face problems and criticism, but what keeps them going is the zeal to promote good cinema. And this is what your festival should aim for —  no matter what happens, everybody who is coming to your festival should go back with at least one film that impacts them deeply. And if you could inspire even one person with the films in your festival, consider your job well done.

A great example of such a small-scale film festival is the annual Bring Your Own Film Festival (BYOFF), held at the beaches of Puri (Orissa). The idea started years back with a few FTII alumni decided to host a small film festival to showcase the work of budding filmmakers. There are literally no rules; anybody with a film can go and screen it in this festival. The USP of this film festival is not the films that it screen but the amazing crowd that gathers there. Several talented film and TV creatives come together to have a good time and enjoy some surprisingly good films. Consider it like a beach celebration with film screenings.

And isn’t this what a festival really means? A big celebration..!

Go ahead and plan yours.

Read: How to Register an Own Film Society in India? How to start an Own Film Festival in India

Continue Reading
You may also like...
Related Topics:How to start film festival india

A Research on Censor Board and its Ban Hammer: How Justifiable Is It??