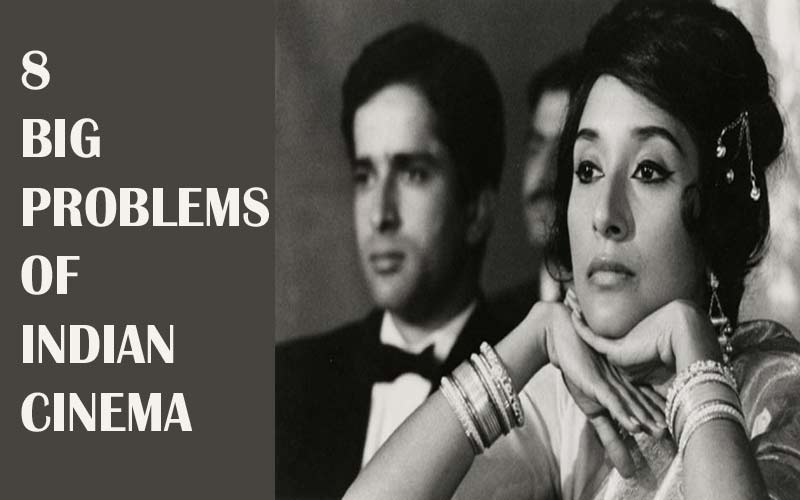 What are the Real Problems of Indian Cinema? In this research Article, Filmmaker Fans explaining about the real  problems facing in Indian Cinema. Filmmaking is a creative process. However, this process is marred with some petty problems worldwide; such as the conflict of director’s vision with the studio’s requirements. From time immemorial, filmmakers have been fighting with the producers and distributors over how to make or modify their film. Where the director wants to keep his film and vision untainted by any outsider influence, producers and distributors had always wanted to safeguard their investment by adding a few glam pieces into the film, to lure the audience.

But, in Indian Film Industry, the problems are far more varied and complicated. Let’s take a look at some of the major problems that pose as a hurdle for Indian cinema:

2.  Bollywood as a Brand: Unlike Hollywood, Bollywood is not a name that brings respect. In fact, Bollywood is deemed as a sardonic term worldwide, mostly used in parodies or themes for parties. Where cinema from other countries like Iran, China and Korea went onto become eponym of sensible and meaningful cinema, India is yet to establish itself as a serious and sincere brand of films. Most of our films are considered musical (which they are not), and we as an audience seem to be not bothered about it.

3. Song & Dance: In Bollywood, it is a prerequisite for a ‘Star’ to be able to dance. Dancing skills are considered a ‘must have’ trait for an actor in our industry. Songs make for around 10-15% of a revenue of a film and so it becomes really necessary for producers and distributors to include a few songs in the film along with a raunchy item number. These musical numbers don’t take the story any further and are in the film as an insurance.

Also Read: You can’t Make an Indian Film Without songs. But, why?

4. Censor Board: Perhaps the biggest hurdle faced by the sensible films in India. Censor Board has been turned into a useless machinery that is infected by a horde of problems. From political entities influencing the decisions — to corruption and plain and simple arrogance, the Censor Board has become mired in different controversies. With Pahlaj Nihlani as its current chairman, the Censor Board has made into the news for several incidents. Filmmakers like Prakash Jha, Raju Hirani, Hansal Mehta and Ashoke Pandit (who is also a CBFC member) have slammed Nihlani for his arrogant and ignorant approach towards rating the films.

5. Lack of Good Scripts: This is the root cause of all problems. Every film is doomed without a good script, and for some strange reason, mainstream Indian filmmakers are not worried about this fact. In fact, even the majority of Indian audience does not care about the quality of script as long as their favourite stars sing and dance to entertain them. In a way, Indian audience go to see the stars singing and dancing, instead of a meaningful story with no loopholes. Though new age filmmakers and production houses are trying to remedy this problem, its going to take a lot of time for Indian audience to be able to detect a good script from a bad one.

Read Also: How to create a brilliant subject for your screenplay?

6. Focus on Stardom: When you have a big star in your film, you do not need a good story or script. Or at least this is what most of the Indian producers think. To analyze this problem with a different point of view, take an example of several advertisements that star big Bollywood stars. You will find that almost all of the ads starring Bollywood big wigs have no real concept or story. These commercials try to sell the product by associating themselves with the stardom of the hired actors. Similarly, several studios and producers in India try to peddle tasteless films by bringing in one or more superstars in it. Just give the film a really good look, throw in some foot tapping music, and nobody will care about the story anymore.

7. Producers: This problem is its own solution as well. Producers are the spine of any filmmaking industry. Contrary to the popular belief, it’s not the audience that decides- what kind of films are made in an industry, but the producers of that locale. However, the majority of Indian producers like to play safe, and in order to do so, they do not shy away from employing old formulas and cliches. From regional to mainstream Bollywood, Indian producers have always attempted to safeguard their money along with the distributors. However, with a new generation of sensible producers we are witnessing a gradual but pleasant change in the scenario. Producers like Ritesh Sidhwani, Guneet Monga and Ronny Screwvala are betting their money on good scripts.

8.Piracy: A worldwide issue, Piracy has been eating into the revenues since home media was invented. Started as bootlegged VHS tapes with hissy visuals and static over the sound, now we can get crystal clear HD quality digital print online just 2 days after the release of a movie. Though some indie filmmakers have debunked the theory that piracy creates a big hole in the producer’s pocket, it still remains one issue against which all the film industries of the world come together to join forces.

We have mentioned only 8 specific problems here, but there are many other issues with our film industry. Besides the deeper you go from mainstream into regional cinema, the more complex and varied these problems will become. With the presence of internet, people are opening up to experimental content. Indie filmmakers have realized the potential behind the online marketing, and so they are saving their cost of physical prints. Instead of releasing prints into theaters they are selling their content online. Here, the handful audience who are interested in their movies watch their film and give them good ratings. It not only earns the makers decent revenues but also makes a name for them in the industry.

Right now we are witnessing a very exciting change in our film industry; more and more audience are accepting sensible cinema as an alternative. And producers and studios are noticing this sudden shift in the power.

Continue Reading
You may also like...
Related Topics:problems of indian Cinema

Why Say, in India It is Risky to Make a Film without Songs
Domestic Violence and Poverty the Two Usual Subjects of Indian Independent Films, But Why?