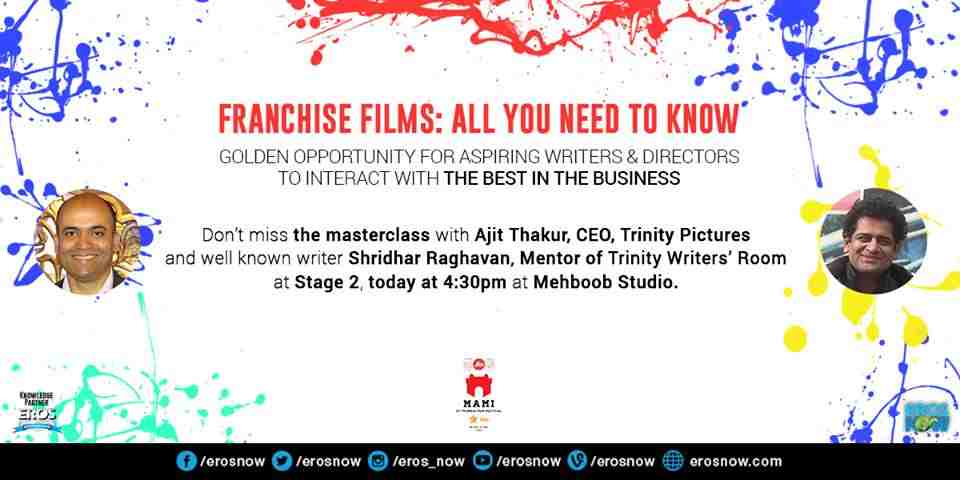 Eros International (A Leading Film Production Company based In Mumbai) hands on with MAMI (Mumbai Film Festival) for conducting a screenwriting workshop for Aspiring writers.

Eros International is the Knowledge Partner of this year’s Mumbai Film Festival. The Script writing master classes will conduct by Mr. Ajit Thakur, the CEO of Trinity Pictures and national award won script writer Mr. Shridhar Raghavan. . In the last February, Mr. Thakur was joined with Eros International as production partner of their Upcoming Films.

Purpose of the Workshop

The Purpose of This workshop is to recruit the script writers as a permanent employee of Eros International’s upcoming films. The participants can submit their applications at there and based on the applications, the selected candidates will be called in (later) for interviews.

The attendees can expect a lecture about the film script writing procedure and industry’s current trend facts from Mr. Thakur. Also, the workshop is giving an opportunity to interact with the senior writers of Eros International and Trinity films.

Call For entry: Drishyam Sundance Screenwriters’ Lab
The Kolkata People’s Film Festival is inviting you to watch Their Films for free.