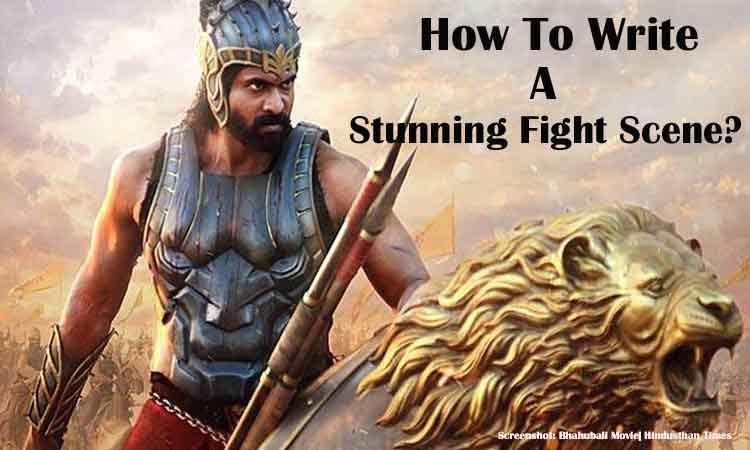 Here’s a quintessential tip for Filmmakers and Screenplay writer about- How to Describe an Action Scene.  Putting an action scene on paper (screenplay) could be tricky for some writers. Not because they are bad writers but because most of us have no experience of being involved in a high speed car chase, a bloody gunfight or a stylishly choreographed king fu duel. So, if you are a screenwriter who is also a good samaritan and a firm believer of non-violence, how do you write a good action scene?

We are going to write an action scene. For this, let’s create a character and name her Neha. In our scene, a very angry Neha has found a gun and is about to go into the room where the bad guys are. We are not going to write how the scene ends, but just take it to its peak and leave it there. So, here is the basic idea of how the action will unfold in this scene:

“Neha checks her gun and enters the room. The bad guys inside notice her and the gun in her hands. Neha without stopping for a moment starts shooting. Bad guys run haywire to save themselves.”

Let’s see how this scene can be written in an exciting way;

Scriptwriting Tips and Suggestions  For Writing an Action/Fight Scene

Screenwriting is different from other writing formats because, in a screenplay, something rarely is left for the viewer’s imagination or interpretation. Everything is supposed to be detailed in the screenplay. Hence, make sure that you show in your scene what is going on, and not just tell the reader/audience about it.

Bad: “Neha checks her gun and enters the room.”

Good: “Neha’s shivering hands opened the bullet chamber of her revolver. Her eyes counted the bullets before her hands closed the chamber again. She then took a deep breath and waited for a brief moment. Neha gathered all the strength in her body and kicked the door open.”

In the above example, the action not only cleared how Neha will enter the room, but it also gave the scene a little tension. And remember, tension is an important part of the action. Let’s go a little further;

Bad: “The Bad guys see Neha entering the room and they pull out their own guns.”

Good: “The door flung open with a loud bang and Neha stormed in with her gun in her hands. The two men; a BALD GUY and a TALL GUY froze in their spots.”

As you can see above, it is imperative to mention all the details about the scene and its character in the action line. It’s a good habit to name all your characters, no matter how minor their role are.

Action speaks louder than words! Therefore, your words need to match the intensity of your action in the scene. You cannot just make your character ‘enter’ a room or ‘hide’ behind a wall. The action line should match the tempo of the scene.

Bad: “The Bald Guy quickly took out his gun and fired at Neha. The Tall guy grabbed his gun as well, while Neha hid behind a pillar.”

Good: “The Bald Guy pulled out his gun like lightning and squeezed the trigger. The Tall Guy scrambled for his gun placed over a barrel beside him. Shooting back at the Bald Guy, Neha jumped behind a pillar and took cover.”

“Detailing is important, but so is the timing. Remember not to drag your action unnecessarily. Use short sentences by keeping the useless details out.”

This is the main difference between an action scene in a novel and a screenplay; write only what you can shoot on camera.

Bad: “Amidst the gunfire, Neha kept herself hidden behind the pillar. The bullets kept flying around her as she held the gun firmly in her hands. Neha then waited for her assailants to run out of bullets. And as she heard the momentary silence, she quickly peeked from behind the pillar and aimed at the two men.”

Good: “Neha stood still as the bullets flew around her. The bad guys ran out of bullets and raced to reload their guns. Right then, Neha jumped out of her cover and aimed her gun in the direction of her assailants. She pulled the trigger multiple times.”

End of Narration For – How To Describe An Action/Fight Scene in Screenplays:

Describing your action in short sentences is highly recommended. It makes the script easier to read and break down for production. As an exercise, you can watch random action scenes on Youtube and try writing them down.

Let’s take this scene from the movie Ant-Man as an example and break it down. In the following scene, Paul Rudd’s character is attacking the scientific HQ of the bad guy who wants to capitalize on the tech that could shrink a human being into the size of an ant.

(Note: Watch the whole visuals carefully (at least 3 times) and then only starts reading further.)

Ant Man appears out of nowhere in the lab. He is in his normal size and is running really fast.

In his ant size, Ant Man jumps through one of the bullet holes and enters the secured server room. He landed on the shoulder of Guard 1 and jump-kicks him in the chin.

Guard 2 turns to help his friend and aims his gun at the tiny assailant.

Ant Man jumps on the barrel of the gun and starts running over it. Jumping from the arm, he reaches Guard 2’s shoulder and delivers a tight punch to his face.

As Guard 2 crashes in the ground, Guard 1 gets up. Perplexed, he frantically looks around, trying to spot their attacker. Suddenly, Guard 1’s tie flips behind his shoulder.

Ant Man in his normal size appears behind Guard 1, and he is holding his tie. Ant Man pulls Guard 1 with his tie and slams him through the glass wall.

With the whole cardboard model exploding like real buildings, Ant Man is running, trying to save himself from the bullets and debris around him. Running zigzag, he stumbles and fumbles on his way, but didn’t stop running.

Guard 4 fires another bullet that flips a cardboard car over Ant Man. Ant Man takes a jump and lands on the top of a building. A bullet from Guard 4’s gun smashes a cardboard bridge that hits Ant Man from behind, sending him crashing into the camera.

The Guards destroy the buildings and the whole cardboard model. Ant Man is trapped in this rain of bullets.

Guard 4 is about to fire another bullet when a punch sends him into the floor. Luis enters the scene and grabs Guard 3’s gun. He first delivers a tight punch into the Guard’s abdomen and another one in his pretty face. Knocking both the guards out, Luis frantically looks for his tiny friend in the shredded cardboard model.

Ant Man appears in his normal size, jumping out of the cardboard model.

Congratulations! You now have learned- The Process and Methods to write an action/ fight scene?

Video: How to write a good action scene in a Screenplay?

Continue Reading
You may also like...
Related Topics:How to Describe Action Scene

7 Essential Screenwriting Tips to Create Stunning Beginnings and Endings
How to make a Film? The Filmmaking Process