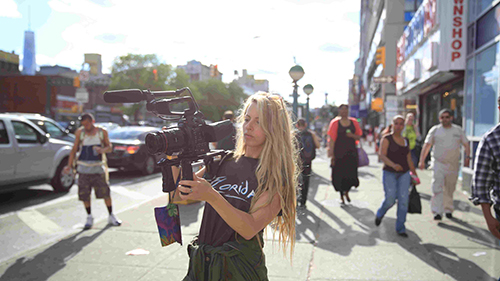 Without moving a camera, how you can make a Film? Camera movement is the integral part of movie making, the movement of the camera in a frame, is deciding by the filmmaker and the Cinematographer. Here in section, we are explaining about the five basic types of camera movements.

The Crane shots are generally used in filmmaking for getting the high angle views: also you can create establishing shots and tracking shots through this method.  Some of the important cranes models that are used in the industry are Mini cranes (Below 40 feet), Garuda cranes and Gimmy jib cranes

Tilting- The camera mounted on a Tripod and it moves up (Tilt-up) and Down (Tilt Down) is called tilting. The tilting movement is found mostly practicable in POV shots.  Let’s illustrate with an example, for an instance, there are two characters in a frame, where the 1st character is looking to 2nd character from down to up. Here you can use a ‘Tilt down’ shot, so that the audience can get a feel of the first character.

Panning- The camera mounted on a Tripod and it moves to left (Pan Left) and right (pan Right) is called panning. You can make a round circle (180 degree) shot by turning the camera from left to right (or) from right to left.  The maximum frame rate that required for this smooth operation is 24 or 25 fps.

We had already been discussed in previous chapters about the handheld-camera techniques and its practices. (See the references that are linked Below)

Click here To read about the analysis of Hand Held Filmmaking

In this typical type of camera movement, the cameraman fixes the camera in his body through a system called ‘Anti Vibration Mountings’ that helpful to reduce the camera shakes.  Wide angle camera lenses are preferable in the Steady cam filmmaking technique.

Comparing with the Hand Held movement, the steady cam camera movement are easier to use and it also produce good results.

Best For- creating the suspense shots, like one character is following other from behind

Really, you can’t expect a good result without a pre-practical skill.

A cinematographer working with a steadicam

Thanks. For Reading: Poll Your opinion in the comment section Below

Continue Reading
You may also like...
Related Topics:Film Production Tips

Here is Everything About Motion Capture Filmmaking Technique
Actually, which camera is used for movie making?